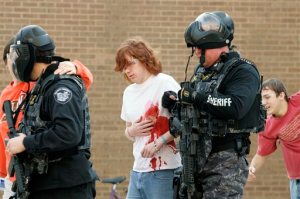 FILE – In this file photo taken Jan. 5, 2009, during a mock shooter exercise at Bowling Green State University in Bowling Green, Ohio, participants portraying victims are led to a triage unit. A 2015 review by The Associated Press finds that eight years after the Virginia Tech massacre led to tighter security at U.S. colleges, some schools make “active shooter” training mandatory for incoming students, and Ohio takes a hands-off approach by leaving policies up to schools to develop. (J.D. Pooley/Sentinel-Tribune via AP, File) MANDATORY CREDIT; TOLEDO BLADE OUT

University police tell media outlets that students and staff have been alerted about the incidents.

Police say employees at the Barnes & Nobles bookstore on the Monroe Park campus discovered a razor blade in a book on Wednesday. The blade had been placed so that it would cut whoever removed the book from the shelf.

Last week, a razor blade was found in another book at the bookstore.

No one was injured in either incident.

Police say the bookstore’s employees are checking all bookshelves and taking other measures to ensure customers’ safety.