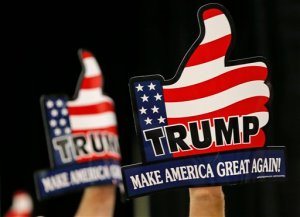 A group of supporters wave signs prior to a speech by Republican presidential hopeful Donald Trump during a rally in Richmond, Va., Wednesday, Oct. 14, 2015. (AP Photo/Steve Helber)

Documents filed with federal regulators Thursday show the billionaire businessman raised $3.9 million between July 1 and the end of September.

Trump often boasts that he’s self-funding his campaign and has not engaged in traditional money-raising. His campaign says it received nearly 74,000 unsolicited donations over the three-month period, the average contribution a little more than $50.

Trump has personally spent just under $1.9 million since launching his campaign. That includes slightly a more than $100,000 contribution to himself over the three-month period.

The documents also show the campaign spending $4.2 million over that time.
Copyright 2015 The Associated Press. All rights reserved. This material may not be published, broadcast, rewritten or redistributed.