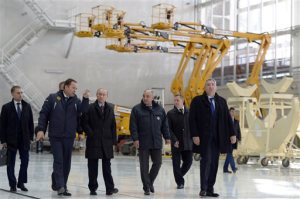 MOSCOW (AP) — Russian President Vladimir Putin on Wednesday chided officials for a four-month delay in building a sprawling space center in the remote Far East, which has been dogged by corruption scandals.

Vostochny Cosmodrome, situated about 5,500 kilometers (3,400 miles) east of Moscow and close to the Chinese border, will give Russia its own facility for manned space launches and ease its reliance on Kazakhstan where Russia is renting a legendary Soviet-era launch pad in Baikonur.

Workers who had been unpaid for months went on strike at Vostochny in the spring and were compensated after appealing directly to Putin. The directors of three subcontractors were later arrested on corruption charges with one of them suspected of embezzling nearly $1 million.

Putin insisted during his visit to Vostochny on Wednesday that the wages were not paid because of the subcontractors and said the funds were coming from the federal budget as planned.

Putin criticized the Russian Space Agency Roscosmos and state-owned company overseeing the construction for a poor control of the sub-contractors.

“You should pay special attention to the qualification of the staff you employ here because we’re seeing a significant amount of construction defects here,” he said in televised remarks.

Deputy Prime Minister Dmitry Rogozin told Putin that officials will be pressing charges for 20 cases of suspected embezzlement and fraud.

The construction of the launch pad is four months behind the schedule and Putin said on Wednesday he expects the space agency to get it ready for the first launch in April.