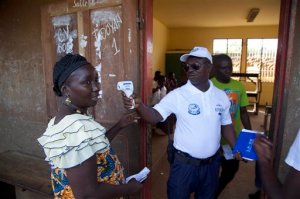 An electoral official takes a temperature reading to check a voter for Ebola before she casts her votes during presidential elections in Conakry, Guinea, Sunday Oct. 11, 2015. Guinea’s president and main opposition candidate called for calm Sunday when they voted in the country’s presidential election, after days of electoral clashes. (AP Photo/Youssouf Bah)

CONAKRY, Guinea (AP) — Guinea’s president and main opposition candidate called for calm Sunday when they voted in the country’s presidential election, after days of electoral clashes and as polling stations reported late and insufficient materials.

Some 6 million Guineans are expected to vote for eight candidates at more than 14,800 polling stations watched by anti-riot police, gendarmerie and international observers. It is this West African country’s second democratic presidential election in more than 50 years, and comes as the country tries to shake the deadly Ebola virus that has killed more than 2,500 here.

Guinea endured decades of corrupt dictatorship after its independence from France in 1958. In 2008, after the longtime strongman died, a military coup led to tumultuous rule until the junta’s leader agreed to go into exile. President Alpha Conde later won the country’s first-ever democratic election in 2010.

Conde’s main challenger is opposition leader Cellou Dalein Diallo. When Conde and Diallo were pitted against each other after the first round of 2010 voting, clashes broke out along ethnic lines. Similar violence this week killed at least three people and injured some 50.

“I call on each Guinean to vote in acceptance of the other and in calm and tranquility,” Conde said after voting.

Diallo voted in the Dixinn area of Conakry.

“I call on Guineans to elect the best. I invite the community to help Guinea preserve peace. We must ensure this election is transparent,” he said.

Guineans were angered in some areas in and around the capital, where voting materials arrived late or ran out.

Bakary Fofana, the president of the electoral commission, said on national radio that voters where envelopes have run out do not need to use them, and stations where materials came late can remain open until 8:00 p.m.

Mamadou Bhoye Diallo, an opposition supporter, said he was worried.

“With these irregularities, I am convinced that it is lost for my candidate,” he said of main opposition candidate Diallo.

Conde’s opponents had said the vote should be pushed back to Oct. 21, saying voter cards and other election materials were not properly distributed. But the national electoral group said it saw no evidence that warranted postponement.

In Sierra Leone, voting by nearly 16,000 Guineans was canceled Sunday because election materials did not get to the Guinean embassy in time to be distributed, said the head of the Guinean elections team, Razeh Sao Kpoghomou.

Many analysts believe the vote will eventually lead to a second round that could see Conde face off against Diallo again. Results are expected late Monday.