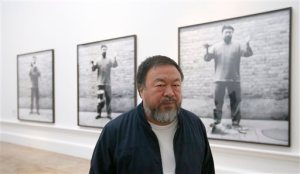 FILE – In this Sept. 15, 2015 file photo, Chinese artist Ai Weiwei poses for photographers with one of his pieces at his exhibition at the Royal Academy of Arts in London. Ai is working on a currently untitled memoir. The Penguin Random House division Crown announced Wednesday, Oct. 14, 2015, that it would release the book in the spring of 2017. (AP Photo/Frank Augstein, File)

The Penguin Random House division Crown announced Wednesday October 14th that it would release the book in the spring of 2017.

Currently untitled, Ai’s memoir will cover everything from his time living in the United States in the 1980s and ’90s to his numerous clashes with Chinese authorities, including his 81-day detention in 2011. In a statement issued through Crown, the artist said he would describe the “struggle for individual freedom and self-expression in this old society.”

Ai often uses his work to draw attention to injustices in China. He also played a key role in designing the “Bird’s Nest” Beijing National Stadium ahead of the 2008 Olympics, a project he later said he regretted.