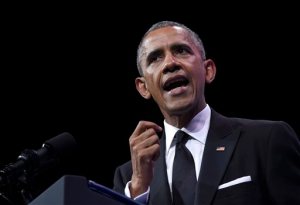 NEW YORK (AP) — For this interview, President Barack Obama was the one asking the questions.

In a discussion held last month in Iowa and posted Monday October 12th by The New York Review of Books, Obama asked Pulitzer Prize-winning author Marilynne Robinson about faith, democracy, education and writing. Obama explained that he met with Robinson because he was anxious to have an unscripted discussion with someone he admired.

“One of the things that I don’t get a chance to do as often as I’d like is just to have a conversation with somebody who I enjoy and I’m interested in,” he told Robinson, “to hear from them and have a conversation with them about some of the broader cultural forces that shape our democracy and shape our ideas and shape how we feel about citizenship and the direction that the country should be going in.

“And so we had this idea that why don’t I just have a conversation with somebody I really like and see how it turns out. And you were first in the queue.”

Obama is a longtime fan of Robinson and her novel “Gilead,” an Iowa-based narrative that the president said he had read while visiting the state as a candidate.

“Gilead” was the first of a Robinson trilogy of stories set in a rural Iowa community. The other novels were “Home” and “Lila.”

Obama told Robinson: “Part of my connection to your books, I think, is an appreciation for — without romanticizing Middle America or small-town America — that sense of homespun virtues. And that comes out in your writing. And it sometimes seems really foreign to popular culture today, which is all about celebrity and being loud and bragging.”