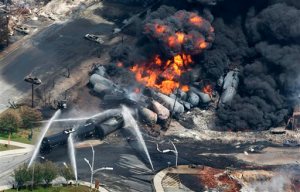 FILE – In this July 6, 2013 photo, smoke rises from railway cars carrying crude oil after derailing in downtown Lac Megantic, Quebec. A U.S. bankruptcy trustee says he hopes checks from a $338 million settlement fund for victims of the derailment that killed 47 people can be mailed in a month or two. A Canadian judge gave conditional approval Thursday, Oct. 8, 2015, to changes in the settlement plan under which Canadian Pacific dropped its objection, setting the stage for final approval Friday by a judge in U.S. bankruptcy court. (Paul Chiasson/The Canadian Press, File, via AP)

Barring any surprises, payments could be made to victims of the disaster by year’s end, said Robert Keach, the bankruptcy trustee. About $83 million is being set aside to settle wrongful death claims.

“We’re very happy for the victims that we were able to get to this point. They’re the primary focus here,” Keach said.

A runaway train with 72 oil tankers derailed on July 6, 2013, in Lac Megantic, Quebec, setting off powerful explosions and causing fires that wiped out much of the downtown.

The disaster led to greater regulatory scrutiny of the use of trains to transport crude oil amid a production surge thanks to new technologies including hydraulic fracturing.

After the fires were doused, the train’s operator, Montreal, Maine & Atlantic, filed for bankruptcy, and the settlement fund is tied to those bankruptcy proceedings in the U.S. and Canada. The fund, worth $446 million in Canadian dollars, was the product of negotiations with about two dozen companies with potential liability.

Canadian Pacific owned the track where the crude oil shipment originated and contended it bore no responsibility, since the train that derailed had a Montreal, Maine & Atlantic locomotive and crew and was operating on MMA rail.

But Keach argued Canadian Pacific bears some responsibility for failing to properly classify the Bakken region crude oil, which was as volatile as gasoline.

Canadian Pacific isn’t contributing to the settlement fund, and the railroad had contended the plan would have hampered its ability to defend itself from lawsuits, because the agreement provided legal immunity only to companies that do contribute.

But the altered amendment calls for a “judgment reduction provision” that would take into account the full settlement paid by others if Canadian Pacific is ordered to pay damages in the future.

“Although CP was not at fault in the derailment, we have been working with the trustee for a solution that protects CP interests and allows payments to be made to victims as soon as possible,” said Canadian Pacific spokesman Martin Cej.