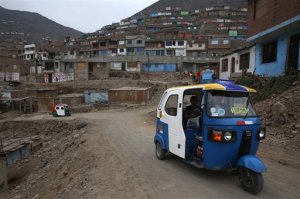 Motorcycle taxis drive passengers in the poor neighborhood of Carabayllo in Lima, Peru, Monday, Oct. 5, 2015. World Bank President Jim Yong Kim, who worked in Carabayllo more than 15 years ago with patients who had drug resistant TB, is in Peru for the annual meetings of the World Bank Group and the International Monetary Fund, Oct. 6-11. (AP Photo/Martin Mejia)

CARABAYLLO, Peru (AP) — In the 1990s, Jim Yong Kim would climb the dusty streets and hillsides of this sprawling slum outside Peru’s capital distributing expensive pharmaceutical drugs he’d brought hidden in his luggage to tuberculosis patients. Residents recall the Harvard-trained physician as a smiling do-gooder with basic Spanish and shoes permanently caked with dust.

Two decades later, he is back in Carabayllo as head of the World Bank, which along with the International Monetary Fund is holding its annual meeting this week in Lima, the first in nearly 50 years in Latin America.

Although he arrived in a caravan of luxury Lexus sedans and wore a clean pair of handcrafted leather boots, living and working among Peru’s poor is seared in Kim’s memory. The experience guides the goal on which he’s staked his reputation: to eliminate extreme poverty by 2030 and raise the incomes of the bottom 40 percent of the world’s people.

“Because we lived and worked in these communities, because we were in their homes, because they were our friends, from a moral and philosophical perspective we just couldn’t bring ourselves to say it’s inconvenient or it’s too expensive,” Kim told The Associated Press in an interview.

After a decade-long boom, China’s economy is slowing, meaning its middle class is unlikely to expand at the same torrid pace. Latin America is beginning to feel the pain of falling commodity prices; the region saw poverty fall by half last decade as its oil, copper and iron ore fed China’s seemingly unquenchable demand. And conflicts in northern Africa and the Middle East aren’t helping matters.

Kim projects that by 2020 fully half of extreme poverty will be in fragile or conflict-afflicted areas.

This week, the World Bank announced that the number of people living below the international extreme poverty line — which it defines as $1.90 a day — is projected to fall below 10 percent this year for the first time in history.

“The last 15 years have been a huge success story, with over 1 billion people rising out of poverty. But now all the low-hanging fruit has been picked,” Kim said.

Kim, 55, was an unconventional choice in 2012 when President Barack Obama lured him from his job as Dartmouth College president to oversee an institution that Kim personally tried to shut down as a protester in the 1990s.

Born in Seoul but raised in Iowa by Korean parents, Kim traveled to Peru in the early 1990s to launch a program in Carabayllo to treat patients with drug-resistant tuberculosis for Partners in Health, a nonprofit he co-founded a few years earlier that now delivers health care to poor communities in 10 countries.

The work was high-risk. Not only was there the threat of exposure to tuberculosis — a Boston priest he worked with died of the disease — but Maoist Shining Path rebels were active in the area. On New Year’s Eve 1993 the rebels blew up a small church dispensary the group used to safeguard the drugs it brought into the country.

Residents remember Kim as someone with a deep sense of empathy, forsaking the habitual surgical mask and giving encouraging hugs to highly contagious patients accustomed to being treated as pariahs.

Maria Morales, a social worker who would accompany Kim on his rounds, remembers him as someone who would connect with residents by dancing and sharing with them a traditional tripe stew known as “cau cau.”

Kim says the biggest challenge was convincing frequently uneducated patients to follow an 18-month regimen of drug therapy and garnering the resources to pay for it amid a complete lack of concern, if not outright hostility, from bureaucrats in Peru, the U.S. and the World Health Organization, who said treating the killer diseases was too costly and complicated to succeed in poor communities.

In the end, Kim proved the naysayers wrong, achieving a cure rate in excess of 75 percent — the highest in the world for such patients. In 2004, he took charge of the WHO’s HIV program, applying the same approach to drive down the prices of drugs for patients in Africa.

The same stubborn determination is needed today to weather what economists forecast could be an extended slump in developing countries, where the bulk of the world’s poor live, says Kim.

About two-thirds of poverty reduction the past 15 years was the result of faster growth, he says.

With the outlook gloomier and some large economies, like Brazil and Venezuela, submerged in recession, some backsliding into poverty by the new middle classes is inevitable.

Already in Mexico, Latin America’s second-biggest economy, poverty is on the rise, with the government recently reporting that 2 million more people fell below the poverty line between 2012 and 2014. Latin America and the Caribbean will see zero growth this year, the World Bank forecast this week, compared with more than 4 percent a year between 2004 and 2013.

Kim says that spending on health care and education for the poor need to be maintained. The World Bank is prepared to help and is increasing its lending commitments to the region to around $12 billion, he said.

Despite leading a 71-year-old institution with more than 10,000 employees, Kim is not your typical buttoned-down development professional.

In Carabayllo, he danced an Amazonian jig with youngsters after welcoming Peru’s president, Ollanta Humala, to the slum he only half-jokingly likes to call home.

“One thing is certain: if you walk into a situation with lots of poor people and you’re cynical and pessimistic that will become a self-fulfilling prophecy, especially if you work for the World Bank,” said Kim. “You’ll miss all the opportunities around you.”