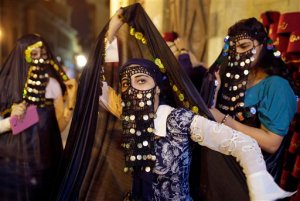 In this Wednesday, Sept. 23, 2015 picture, Egyptian girls wear ceremonial ancient clothes and “Yashmak”, a veil concealing all of the face except the eyes, as they celebrate Eid al-Adha at El-Moez Street in historical Fatimid Cairo, Egypt. (AP Photo/Amr Nabil)

CAIRO (AP) — The recent decision to ban all female staff from wearing the full face veil aims to put an end to student complaints of “poor communication” in class, the head of Egypt’s Cairo University said Friday.

Although the head-to-toe covering known locally as the niqab is “not a phenomenon” among his teachers, Gaber Nassar told The Associated Press that he wants to “cure the disease” before it becomes one.

Islamic clerics and students have denounced the move as discriminatory, but Nassar said he has the backing of the Grand Mufti, Egypt’s top religious authority.

The niqab, Nassar said, is especially problematic in language courses, where the cloth barrier of the veil hinders student-teacher communications — producing low grades and graduates incapable of enunciation.

The vast majority of Egyptian Muslim women wear a form of veil that covers the hair but leaves the face uncovered. However the number of women wearing the full niqab veil has increased dramatically in the past 10-20 years.

In 2009, Cairo University had banned both students and staff from wearing the niqab on campus or in the university’s dorms. The ban was later overturned by a Cairo court following a lawsuit filed by a professor.

“That was unconstitutional because it said all of the university, we are saying now only the lecture halls,” Nassar said, daring anyone to challenge his decree in court. “We are not banning the niqab, we are just regulating it.”

The ban is already receiving mixed reviews among students.

“This is part of the greater war on Islamists,” said a male Islamist student. “But it doesn’t matter because bigger violations of personal freedoms happen and no one moves.”

Another non-Islamist male student said Nassar’s “rationale makes no sense” and a teacher wearing the niqab “can easily just pull the cloth away from her face when she speaks, if their problem really is articulation.”

Both students spoke on condition of anonymity fearing reprisals.

Following the 2013 military overthrow of Islamist President Mohamed Morsi amid massive protests against his rule, Egypt’s security forces launched a media-backed crackdown on Islamic groups, deepening instability and polarization in the country.