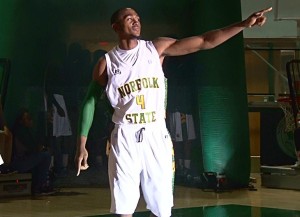 Fans can get a sneak peek at the 2015-16 Spartan basketball teams when doors open at 6:30 p.m. Action will get underway at 7 p.m. with performances from NSU cheerleaders and a dance troupe. Spartan Madness is expected to last until 9:45 p.m.

Tickets are $5 and will go on sale by the end of this week or early next week. Tickets can be purchased through the NSU Ticket Center.

Following the cheerleaders and dancers, the jam-packed evening will continue with a celebrity/alumni all-star game. Players from the women’s team will then be introduced to the crowd, and the Spartans will take part in a 3-point shooting contest and an intrasquad scrimmage.

The men’s team will run through their introductions following the women’s scrimmage. Select men’s players will compete against each other in a 3-point shooting contest and a slam dunk contest before holding an intrasquad scrimmage of their own.

Along with the activities on the court, the NSU cheerleaders and Izzy the DJ will all be in attendance as well as possibly the Spartan Legion. Giveaways will be handed out throughout the evening, and one lucky fan will also have the opportunity to win $50,000 in either a 3-point shooting or half court contest. Exact details will be determined at a later date.

The complete list of participants in the celebrity/alumni game will be announced at a later time as well.