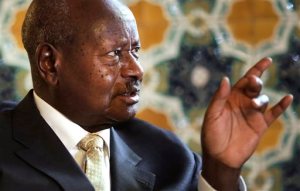 Ugandan President Yoweri Museveni speaks to reporters at the Akasaka Palace state guesthouse in Tokyo Saturday, Sept. 12, 2015. Museveni said Islamic extremists in Somalia may have taken some of his countrys troops as prisoners after a recent attack on an African Union base there. He said that 19 soldiers were killed and six were missing following the Sept. 1 attack. He blamed the laxity of the Ugandan commanders for the losses. (AP Photo/Eugene Hoshiko)

KAMPALA, Uganda (AP) — The head of the U.S. military’s Africa Command is visiting Uganda, a key ally in the fight against Islamic extremists, to plan regional security with Ugandan brass.

The east African nation of Uganda is a key ally of Washington on regional security, especially in Somalia where Uganda’s government was the first to deploy troops to protect a weak federal government from the al-Qaida-linked rebels of al-Shabab.

Ugandan troops and U.S. forces, acting as military advisers, are also cooperating in the hunt for the fugitive Ugandan warlord Joseph Kony in the jungles of central Africa.