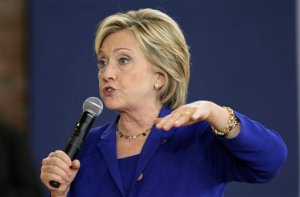 Critics say the tax will raise costs for consumers, while supporters see it as a brake on wasteful health care spending.

Clinton’s effort is part of a series of changes she is proposing to “build on” the Affordable Care Act, Obama’s signature domestic achievement. On the campaign trail, she often praises the law but says she wants to expand the cost-savings and coverage benefits, particularly for middle-class Americans.

“I have proposed new reforms to build on the progress we’ve made and lower out-of-pocket costs for families,” she said in a statement. “Too many Americans are struggling to meet the cost of rising deductibles and drug prices.”

The tax, which takes effect in 2018, is strongly opposed by unions who caution it would raise health care costs on their members. But it’s also a major way of funding the costs associated with the health care law.

Many unions have held off from endorsing Clinton, often because their rank-and-file members prefer her primary opponent Vermont Sen. Bernie Sanders and their leadership wants to wait and see if Vice President Joe Biden decides to enter the 2016 race. Last week, Sanders and seven other Democratic Senators introduced a plan to repeal the tax.

The Cadillac tax was meant to discourage extravagant health insurance coverage, which experts say encourages over-treatment and adds to health care costs. But critics say it’s actually a tax on essentials, not luxuries.

A recent analysis from the nonpartisan Kaiser Family Foundation estimated that 26 percent of all employers would face the tax in at least one of their plans during its first year. Nearly half of larger companies would face the tax that year, because they tend to offer better benefits.

Consultants say employers would try to avoid the tax by requiring workers to pay a bigger share of their medical costs out-of-pocket — essentially raising costs on their employees.

The tax is 40 percent of the value of employer-sponsored plans that exceeds certain thresholds: $10,200 for individual coverage and $27,500 for family coverage. It is levied on insurers and health plan administrators, who are expected to pass it back to employers. The 40 percent rate is well above the income tax rates that most workers face.

The Obama administration says critics overstate the potential impact of the tax.

A new estimate by the congressional Joint Committee on Taxation puts the 10-year cost of repeal at $91 billion. Clinton says some of her other health care proposals would more than cover that expense, keeping the law fully-funded.