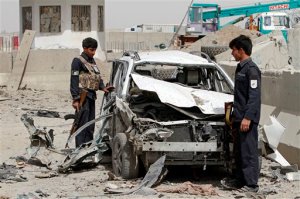 Afghan security forces inspect the site of a suicide car bombing that targeted a police checkpoint in the Daman district, on the outskirts of Kandahar, Afghanistan, Sunday, Sept. 20, 2015. An Afghan official says several people, including two police officers, were wounded in the suicide attack in Afghanistan, while at least 20 other civilians were wounded in separate attacks. (AP Photo/Allauddin Khan)

Zia Durani, spokesman for the police chief in southern Kandahar province, said that the suicide car bomber targeted a police checkpoint in the Daman district.

Meanwhile five civilians were wounded after a bomb attached to a motorbike exploded in Aibak, the capital of northern Samangan province, said Sediq Azizi, spokesman for the governor.

No any group has immediately claimed responsibility for the attacks.

Khosti added that the officers were on their way from Zurmat toward Gardez, the provincial capital, in a private vehicle when they came under the attack.

Taliban insurgents have stepped up their attacks on Afghan soldiers and police in recent months, using roadside bomb attacks and suicide attacks. Afghan security forces are now solely in charge of the public safety across the country after U.S. and NATO forces formally ended their combat mission at the end of last year.

Separately, hundreds of people, including government officials, gathered in the capital Kabul on Sunday to mark the 4th anniversary of the assassination of former president Burhanuddin Rabbani during an official ceremony under tight security.

Rabbani was the head of the country’s high peace council when he was assassinated by a suicide bomber posing a messenger inside his home in Kabul in September 2011.