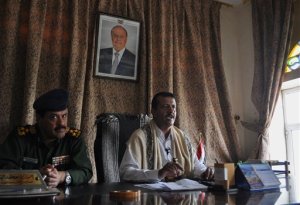 MARIB, Yemen (AP) — The Saudi-led coalition targeting Yemen’s Shiite rebels pounded the insurgents’ positions Thursday with heavy artillery fire on the outskirts of the central city of Marib, part of their push to retake the capital, Sanaa.

The heavy bombardment came hours after the rebels, known as Houthis, aired footage on their satellite television channel purporting to show a Saudi soldier held as a prisoner of war. A top al-Qaida leader in Yemen meanwhile praised the campaign against the Houthis and called for Islamic rule in the Arab world’s poorest country.

The dull thud of artillery fire rumbled across Marib but its residents, many carrying Kalashnikov assault rifles, appeared unperturbed by the nearby fighting. Shops downtown were open for business, and residents crowded a market to buy qat leaves, a mild narcotic widely consumed in Yemen.

“As you see, there are no clashes, mostly just shelling … from far away,” deputy governor Abdul Rab Ali said Thursday.

Marib is the capital of the largely desert province of the same name east of the capital. Authorities say the coalition’s operations in the area include targeting Houthi positions near the Marib dam and the town of Sirwah, about 40 kilometers (25 miles) west on the road to Sanaa.

The provincial capital is controlled by forces loyal to exiled President Abed Rabbo Mansour Hadi. Ali said 80 percent of the province is controlled by pro-Hadi forces, while the Houthis and their allies control the rest.

Military vehicles used by forces from the United Arab Emirates, a central member of the coalition, made their way Thursday along a two-lane road between Marib and a sprawling military base further east.

Coalition troops and allied Yemeni forces will have to traverse rugged mountains as they push westward toward Sanaa. It is an area that Emirati Brig. Gen. Ali Saif al-Kaabi likened to parts of Afghanistan, where Emirati troops were deployed as part of the NATO-led mission.

Coalition and pro-Hadi forces also are advancing toward the capital from the south after retaking the key port city of Aden over the summer.

In addition to rockets and mortar rounds they lob at their opponents, the Houthis and their allies have laid land mines in the path of the advancing forces, military officials say.

Mine-resistant armored vehicles and tanks the Emirates has deployed east of the capital provide some protection, but the mine threat clearly has commanders concerned. An Emirati soldier was killed by a mine on Monday — the country’s 54th loss this month.

“Our people are running into difficulty because of the terrain, and number two, because of the fearless enemy who is ready to die,” Sultan Ali al-Aradeh, the governor of Marib province, said in an interview Monday.

The influx of troops and hardware from the Emirates and other Gulf states appears to be adding momentum to the fight to retake territory. The immediate aim is to reinstate Hadi’s government, while the wider goal is to block what the coalition sees as Iranian expansion across the region.

“Our brothers from Saudi, the Emirates and the rest of the Gulf are helping the Yemeni people. We are one of theirs and they are part of us,” Yemeni Gen. Abdul Rab Qassim al-Shadadi said Monday.

A missile attack on an ammunition depot at the Emirati forward operating base at Saffer in Marib province on Sept. 4 killed 52 Emirati troops, as well as at least 10 soldiers from Saudi Arabia and five from Bahrain. It was the heaviest military loss for the Emirates since its founding in 1971.

The Houthis also claim to have captured some Saudi soldiers. Footage aired on their satellite channel purported to show a Saudi corporal saying other troops are held by the rebels, though he didn’t elaborate.

The Associated Press could not independently verify the claim. The state-run Saudi Press Agency did not immediately report the claim, nor did government officials acknowledge it.

The Saudi-led coalition has been training thousands of pro-government troops and working with some tribesmen. They have had some success in recent months, particularly as they brought additional weapons, armor and trained personnel to the fight.

But the fighting has taken a heavy toll on Yemen. More than 4,000 people have been killed, and the humanitarian crisis has left the impoverished country on the brink of famine.

Meanwhile, video has emerged of a top al-Qaida leader praising the campaign against the Shiite rebels. Khalid Batarfi, al-Qaida’s leader in Hadramawt, Yemen’s largest province, called on his followers to continue the fight. The Sunni militants of al-Qaida view Shiite Muslims as heretics.

Batarfi also called on followers not to allow the exiled Yemeni government “to go back to rule Yemen with secularism and democracy.”

“This is your chance, so seize it. Today the initiative is yours to take, God willing,” he said in an online video uploaded Sunday. “Raise the flags of Shariah and guidance by the book … and live under the rule of Islam.”

Washington considers al-Qaida’s Yemen branch to be the most dangerous offshoot of the terror network. Al-Qaida has played only a minor role the war, though it has added hundreds of young men to its ranks and is stockpiling weapons, several officials have said.