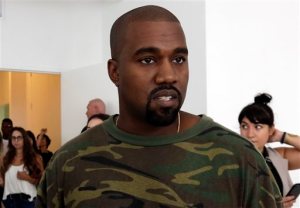 West debuted Yeezy Season 2 on Wednesday, September 16, at the Skylight Modern. The collection was launched in four sets: First a woman entered the stage wearing tan, almost the same color as her skin, and she yelled, “First row, fall in. Second row, fall in.” Others models followed, sporting the same color and blond ponytails.

The clothes ranged from loose jackets to high-waisted pants to tank tops. The leader wore a hoodie. Kim Kardashian and North West matched the models with their own tan ensembles.

The next set, which also featured a model yelling orders, featured army green, followed by deeper brown and then black. Most of the pants on the men were loose. There were tighter items on the women, including leggings and bathing suits. And some of the models wore baseball caps that covered their eyes.

All the models entered during the finale as a song blasted in the background. One of the models even started smoking.

West appeared, earning loud applause as he walked in between four rows of models.

Earlier this year, West debuted his Yeezy Boost shoe line for Adidas during Fashion Week where Beyonce, Jay Z, Rihanna and Diddy sat in the front show. At that show, North West made headlines when she cried, but the 2-year-old was chilled out for most of West’s presentation Wednesday, September 16: As she sat on her mother’s lap, she said “Mommy” a few times and ate a lollipop. She sat on the floor for some of the show, then moved to the lap of her aunt Kourtney.