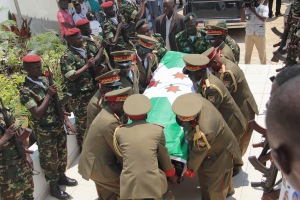 Army officers carry the casket of Lt. Gen. Adolphe Nshimirimana, during his funeral in Bujumbura, Burundi, Saturday, Aug. 22, 2015. Government officials, relatives and friends on Saturday attended an emotional funeral service for Lt. Gen. Adolphe Nshimirimana, the former intelligence chief and key ally of the president who was assassinated earlier this month in the Burundian capital of Bujumbura. (AP Photo/Berthier Mugiraneza)

BUJUMBURA, Burundi (AP) — Burundi’s army chief survived an apparent assassination attempt by gunmen who attacked a convoy of vehicles that was escorting him in the nation’s volatile capital on Friday, witnesses and an official said. The military said six people were killed.

Gunmen wearing military fatigues and riding a pick-up truck fired on the convoy of the army chief, Maj. Gen. Prime Niyongabo, in Bujumbura’s Kinindo neighborhood early Friday, said witness Anicet Nkunzimana, who lives in the neighborhood. She said there was exchange of gunfire and explosions.

Military spokesman Col. Gaspard Baratuza told reporters in Bujumbura that three soldiers, one civilian and two of the attackers were killed in the incident.

Niyongabo was not injured and is now at work in his office, he said.

He did not take questions from reporters.

Witness Hamissi Misigaro said the vehicle used in the attack was later retrieved from the anti-government stronghold of Musaga, where he lives. Four men were arrested there following a search operation by security forces, he said.

Niyongabo is believed to have helped foil an attempted coup in May against President Pierre Nkurunziza, who faced deadly street protests over his bid for a third term.

Nkurunziza won re-election in July in polls widely seen as not credible, and violence persists in Bujumbura.

In August, a top military general who once led the intelligence services, Adolphe Nshimirimana, was killed in a drive-by shooting in Bujumbura, sparking concerns of revenge killings in which regime loyalists and opponents target each other.

On Monday, an opposition spokesman, Patrice Gahungu, was killed by gunmen outside his home in Bujumbura.