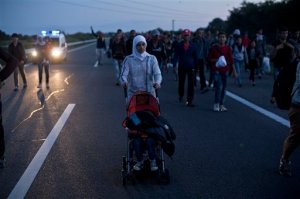 A woman pushes a stroller as she walks on the highway close to Roszke, Hungary, Monday, Sept. 7, 2015. Several hundred Arabs, Asians and Africans tired of waiting for buses broke through Hungarian police lines near the Serbian border Monday and marched north on the main highway towards Budapest as authorities once again demonstrated an inability to control the human tide passing through Hungary. (AP Photo/Marko Drobnjakovic)

ROSZKE, Hungary (AP) — Hundreds of angry and frustrated asylum-seekers broke through police lines Monday near Hungary’s southern border with Serbia and began marching north toward Budapest, while Britain and France pledged to take in tens of thousands more refugees to try to ease the crisis.

As European leaders debated how to share responsibility for the more than 340,000 people from the Middle East, Africa and Asia who are already seeking refuge, Germany promised to spend billions of euros in extra aid for those already there and those yet to arrive. France weighed whether increased airstrikes against Islamic State militants would help to stem the flow of those fleeing Syria.

But the Hungarian prime minister scoffed at a proposed quota system for refugees in the 28-member European Union, saying it wouldn’t work unless Europe first secured its borders.

Hungary’s inability to control the flow of people across its southern border with Serbia was on graphic display Monday. Crowds who had grown tired of waiting for buses at Hungary’s first migrant holding center near the border village of Roszke tore down flimsy police tape, advanced down a country road and walked around and straight through rows of police trying to block them.

Police shoved individual migrants and fired jets of pepper spray, but it had little effect as about half of the 500-strong crowd reached the M5 highway that connects Serbia and Hungary. They headed north along the shoulder, raising their arms and chanting “Germany! Germany!”

Police merely walked beside them as a lone helicopter monitored the marchers’ progress north as darkness fell. The highway was blocked for nearly 50 kilometers (30 miles) as a precaution. A few hours later, as the marchers paused by the roadside to try to sleep in the cold on the pavement, police delivered buses and requested they board for delivery to a refugee camp. Most refused.

The northward march mirrored Friday’s surge of people down Budapest’s motorway toward Austria, which forced Hungary to concede defeat and bus thousands to the Austrian border. Germany’s rail company said Monday it had carried 22,000 asylum- seekers over the weekend on more than 100 trains, a number boosted by the fact that Hungary again has dropped visa checks on foreigners buying train tickets for the wealthier countries to the west, particularly Germany.

Following an overnight Cabinet meeting, Germany said it would set aside 6 billion euros ($6.6 billion) to boost aid for asylum-seekers and hire 3,000 more federal police. It also planned to make it easier to build refugee housing and for non-German speakers to hold jobs.

German Chancellor Angela Merkel reflected on what she called “a moving, in some parts breathtaking weekend behind us,” when Austria and Germany threw open their borders for thousands of asylum-seekers trying to get out of Hungary. She said all EU countries could help accommodate the families fleeing war and poverty.

Britain and France, seen as less generous than Germany so far, overcame reluctance and stepped up their commitments Monday. British Prime Minister David Cameron said his country would resettle up to 20,000 Syrians from camps in Turkey, Jordan and Syria over the next five years.

“The whole country has been deeply moved by the heartbreaking images we have seen over the past few days,” he told Parliament. “It is absolutely right that Britain should fulfill its moral responsibility to help those refugees.”

French President Francois Hollande said his country would take in 24,000 refugees over the next two years. To relieve the burden on Germany, he told Merkel that France would take in 1,000 of the migrants who have just arrived from Hungary. Most say they are fleeing the 4-year-old civil war in Syria.

Saying France has to target “the causes of these horrors,” Hollande announced possible airstrikes against Islamic State targets in Syria, an idea he previously had resisted. France will send reconnaissance flights over Syria starting Tuesday, he said, and “we will be ready to strike.”

Calm returned Monday to the main Austrian-Hungarian border point, where thousands crossed over the weekend by foot, bus, train and car after complaining of neglect and human rights violations in Hungary and refusing to stay in refugee camps there.

Austrian Chancellor Werner Faymann and other EU leaders said Hungarian Prime Minister Viktor Orban bungled Hungary’s intake of migrants so badly that it left Austria and Germany no choice but to open their borders Saturday.

Orban compared Hungary to a “black sheep” representing a voice of reason in the European flock of countries. He argued that the EU first must focus on security measures to force those from troubled lands to seek asylum in neighboring countries, not in the heart of Europe. He said the current discussions on a new quota to handle 120,000 migrants soon would lead to discussions on hosting millions more.

In a related development, Hungarian Defense Minister Csaba Hende resigned Monday. The statement from Orban’s government didn’t explicitly blame him for failing to complete the construction of a fence along Hungary’s 175-kilometer (110-mile) border with Serbia, but it was supposed to be finished last month and remains largely incomplete.

The marchers heading for Budapest and, they hoped, eventually Germany blamed Hungary for their difficult and slow journey.

“They treated us very badly. They left us without tents, without blankets, on the ground … without toilets for two days. We could not ever bear that,” said one Syrian man walking along the highway who would give only his first name, Saadi.

Migrants trying to reach the heart of Europe via Turkey, Greece, the Balkans and Hungary have faced dangers, difficulties and delays on every link of the journey.

Scuffles broke out Monday near the village of Idomeni on Greece’s northern border with Macedonia, where police angered a 2,000-strong crowd by permitting only small groups to cross every half hour. Tensions eased only when police permitted larger groups to proceed.

Greek Migration Minister Yiannis Mouzalas estimated that at least two-thirds of the more than 15,000 travelers stranded on the eastern Aegean island of Lesbos would be ferried to mainland Greece in the next five days. Lesbos bears the brunt of the refugee influx from nearby Turkey, with more than 1,000 arriving daily on small boats in often dangerous conditions.

Germany has an open-door policy for asylum seekers, particularly from Syria, but also wants to send back travelers who are only job-seekers, not war refugees.

In a late-night meeting that lasted until early Monday in Berlin, the German government decided to make it easier to deport people from stable nations such as Montenegro, Kosovo and Albania.

German media reported that five asylum-seekers were injured in a fire Monday in Rottenburg in southwest Germany — three when they jumped from a burning house and two who were treated for smoke inhalation. No cause for the blaze was given, although right-wing militants in Germany have set fire to other properties earmarked for asylum-seekers recently.

“There will be conflicts,” the economy minister said. “The more openly we talk about the fact that people are worried, that there’s fear in the country and that there may be conflicts will, I think, help us deal with this realistically and confront reality.”