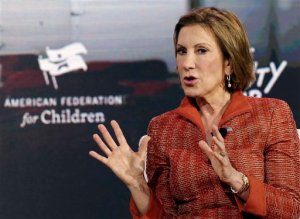 The former technology executive cited concerns about terrorism in explaining her position during an appearance on CBS’ “Face the Nation” that the U.S. “sadly, cannot relax our entrance criteria.”

An estimated 4 million refugees have fled Syria since 2011. The United States has accepted about 1,000 Syrians this year among 70,000 refugees from across the world.

Some have called on the U.S. to expand its refugee program.

Gen. Martin Dempsey, chairman of the Joint Chiefs of Staff, described the situation as “a shared responsibility among the civilized nation states of the world,” in an interview that aired Sunday, September 6, on ABC’s “This Week.”

Yet Fiorina, a former Hewlett-Packard CEO, said the U.S. should be “very careful about who we let enter this country from these war torn regions to ensure that terrorists are not coming here.”

Ohio Gov. John Kasich, another Republican presidential candidate, suggested there was room for the United States to play a bigger role.

“I think we do have a responsibility in terms of taking some more folks in — making sure they assimilate, and at the same time, helping people to actually be safe as they move — that’s logistical support,” he told ABC. “But this is fundamentally an issue that Europe has to come to grips with.”