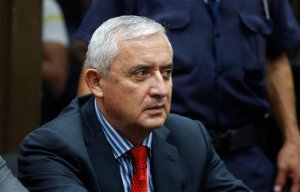 Guatemala’s President Otto Perez Molina sits in court to face corruption charges, after he submitted his resignation in Guatemala City, Thursday, Sept. 3, 2015. The president submitted his resignation at midnight local time late Wednesday after a judge issued an order to detain him in a corruption scandal. Perez Molina was already under order not to leave the country, and on Tuesday the congress lifted his immunity from prosecution. (AP Photo/Luis Soto)

Guatemalan ex-President Otto Perez Molina has entered a military barracks where he will spend the night in custody before a court hearing into corruption allegations against him reconvenes.

He was taken from the court in an SUV and escorted by a dozen police vehicles, initially surrounded by a scrum of media cameras.

The hearing is scheduled to continue at 8 a.m. local time on Friday.

Judges are hearing evidence from prosecutors who seek to bring criminal charges against the man who was president of the country until last night.

Perez Molina denies the allegations, calling them hearsay. He says the jail stay is unnecessary and reiterated his willingness to face the corruption investigation head-on.

Two officers flanked Perez Molina, but stood by as the former president was peppered with questions by journalists.

Perez Molina said the trip to jail is unnecessary and reiterated his willingness to face the corruption investigation against head-on.

He says he has always promised to “respect due process” and says he is “not going to flee.”

A Guatemalan judge has ordered former President Otto Perez Molina held in jail overnight during a court hearing on corruption allegations that led him to resign, though his attorney is appealing the ruling.

The judge says the decision aims to “ensure the continuity of the hearing.”

No charges have been filed against the former president, who denies any wrongdoing.

Perez Molina’s attorney protested that the measure was unnecessary because the former president has appeared voluntarily before the court.

His successor, Alejandro Maldonado, was sworn in Thursday afternoon.

New Guatemalan President Alejandro Maldonado is asking people who have been protesting against corruption to propose “young professionals” to join his new government.

As he took the oath of office on Thursday, Maldonado said he’d asked all existing cabinet members to put their posts at his disposition.

The 79-year-old former diplomat, legislator and judge will hold office only until January, when a newly elected president takes office.

Weeks of large protests were among the factors that led to the resignation of President Otto Perez Molina, who was appearing before a judge considering whether to bring charges of corruption against him.

Alejandro Maldonado has been sworn in as Guatemala’s new president amid a corruption scandal that has caused a national political crisis.

The conservative former judge will serve out the term of form President Otto Perez Molina, who resigned late Wednesday after a judge issued an order for this detention. Prosecutors accuse the ex-president of leading a customs fraud ring.

His term ends in January.

Former Guatemalan President Otto Perez Molina says the corruption allegations that led to his resignation are based on hearsay, “gossip and accusations.”

During a recess in court proceedings, Perez Molina told The Associated Press that during Guatemala’s long civil war, rumors about a person could get him killed.

He says that’s an example of “how dangerous it is to use hearsay, and that’s what I’m hearing today.”

Prosecutors are laying out their case that Perez Molina headed a customs fraud scheme that has led to the arrests of other senior officials. He denies any wrongdoing.

He said earlier that he resigned to protect the institution of the presidency. Guatemala’s Congress has now accepted the resignation.

Asked how he feels, Perez Molina replied: “I feel bad, this is very hard.”

The White House says it will continue to support Guatemala’s democratic and constitutional institutions following the resignation of Guatemalan President Otto Perez Molina.

White House press secretary Josh Earnest says the U.S. respects Perez Molina’s decision to resign and commends “the people of Guatemala and their institutions for the manner in which they have dealt with this crisis.”

He also says the U.S. expects that the next government “will continue to implement the kinds of reforms that we believe are in the best interests of the people of Guatemala, particularly, when it comes to fighting corruption and impunity.”

Guatemala’s Congress has voted to accept the resignation of President Otto Perez Molina, even as he appears before a judge determining if he should be charged with corruption.

Perez Molina resigned at midnight, though he technically remains president until Congress meets to accept it. The Congress plans to meet later in the day.

He’s appearing in court and maintains his innocence. A probe of corruption earlier led to the resignation and jailing of his vice president.

Perez Molina has entered the courthouse where he is to appear before the judge who issued the detention order that prompted him to resign.

Earlier in the day, he gave an interview to a local radio station, saying that he doesn’t “trust Guatemalan justice” and criticizing the nation’s prosecutors and the United Nations commission that have mounted a huge investigation in the fiscal fraud case he was implicated in.

The detention order against Molina Perez and his subsequent resignation are being welcomed by rights advocates and other Guatemalans.

“No one in the country is above the law,” he said Thursday morning. “Now the people will be vigilant. Abuses or a lack of transparency will not be permitted under future leaders. All eyes will be on them.”

Jorge Briz, president of Guatemala’s business chamber, says that Guatemala “has sent a message to the world” that “the law is working.”

Gabriel Wer, who heads the movement that organized the protests against Molina Perez, says that the rallies were “a fundamental ingredient in all that is happening.”

Guatemalan Judge Miguel Angel Galvez says the court will be waiting to hear Perez Molina’s defense when he appears in court Thursday morning.

The judge’s detention order prompted the president to step aside.

About 50 journalists are outside the courthouse, awaiting the former president’s arrival. Security is tight, with dozens of police and members of the presidential guard blocking entrances to the building.

Otto Perez Molina says through his attorney that he will appear before a judge on Thursday to face the corruption charges against him following his resignation as president of Guatemala.

Perez Molina submitted his resignation at midnight Wednesday local time after a judge issued an order to detain him in a customs fraud case that earlier led to the resignation of his vice president.

The resignation must be approved by the Congress, which was to consider the matter on Thursday morning.

Perez Molina was already under orders not to leave the country, and on Tuesday the Congress lifted his immunity from prosecution.