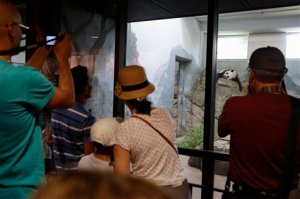 Smithsonian National Zoo visitors take pictures of giant panda Mei Xiang, mother of panda youngster Bao Bao who was born Aug. 23, 2013, as she sleeps in the indoor habitat at the zoo in Washington, Wednesday, Aug. 12, 2015. The zoo says that the hormone levels of its adult female panda were rising, a sign that she might be pregnant. Mei Xiang, one of the two adult giant pandas which arrived here from China on Dec. 6, 2000, has started to show a secondary rise in her urinary progesterone levels since July 20 after she was artificially inseminated on April 26 and 27, the zoo said in a statement. (AP Photo/Jacquelyn Martin)

The cubs arrived about five hours apart Saturday. Panda mom Mei Xiang (may-SHONG) gave birth to the first cub at 5:35 p.m. and a second at 10:07 p.m., the zoo said. If the cubs survive, they would be the 17-year-old panda’s third and fourth surviving offspring.

Mei Xiang’s first cub, Tai Shan, was born in 2005 and returned to China in 2010. Her second cub, Bao Bao, turns 2-years-old Sunday and still lives at the zoo.

The new additions mean that for the first time the zoo has five pandas in residence. In addition to Bao Bao, Mei Xiang and the new cubs, the zoo is also home to an adult male panda named Tian Tian. In the past, the zoo has never had more than three pandas at one time.

Zoo director Dennis Kelly said at an evening news conference following the first cub’s birth that he was “so happy, so pleased, so excited.” The zoo’s chief veterinarian Don Neiffer was also asked about the possibility of a second cub. In 2013, when Mei Xiang gave birth to Bao Bao, she also gave birth to a stillborn cub. Asked about the possibility of a second cub this time around, Neiffer said that during an ultrasound earlier this week he did see “two areas that made me excited.”

The zoo says after the second cub was born, keepers removed one of the cubs and moved it to an incubator. The zoo says it will alternately swap the cubs, allowing one time to nurse and spend time with Mei Xiang while the other is bottle fed. The zoo said it could not confirm whether the cub that was removed was the first or second born. It says pandas give birth to twins about 50 percent of the time, but this is only the third time a giant panda living in the United States has given birth to twins.

Keepers will be watching the newest cubs closely. Pink, hairless and blind, newborn cubs weigh three to five ounces and are about the size of a stick of butter.

Kelly, the zoo director, called it a “very fragile time.”

“We’re very excited, but we’re very cautious,” he said before the second cub’s birth, noting that in 2012, Mei Xiang gave birth to a cub that died after just six days. Its lungs hadn’t fully developed.

Still, Neiffer, the zoo’s chief veterinarian, said the first cub had shown “all signs of being healthy and happy.” Keepers have heard it squeal and grunt. The zoo said on Twitter that the second cub also appeared healthy.

Even if the new cubs are physically fit, panda fans shouldn’t expect to see them in person for a while. After Bao Bao was born in 2013, it was about 5 months before she made her public debut. Fans who want to see the newest pandas will have to try to catch a glimpse of them on the zoo’s online panda cameras. Though the zoo’s camera-viewing site can host about 850 viewers at a time, spokeswoman Pamela Baker-Masson says the site has been overloaded with people trying to watch. Fans can also download a zoo app to view the cameras.

The public also won’t learn immediately whether the cubs are male or female or whether the zoo’s male panda, Tian Tian, is the cub’s father. Mei Xiang was artificially inseminated with sperm from Tian Tian and a panda named Hui Hui from Wolong, China, who was determined to be one of the best genetic matches.

The zoo will use saliva from the cubs’ mouths to determine gender and paternity, said Laurie Thompson, a giant panda biologist at the zoo.

The National Zoo is one of only four zoos nationwide to have pandas, which are on loan from China, and its cubs are the only ones born in the United States this year. Pandas also have a history at the Washington zoo that makes them closely watched.

The zoo’s first pair of pandas, Ling-Ling and Hsing-Hsing, were a gift from China following President Richard Nixon’s historic 1972 visit to the country. The pair had five cubs while living at the zoo but none survived.

The zoo’s current pandas, Mei Xiang and Tian Tian, the parents of both Bao Bao and Tai Shan, arrived in 2000. The pandas belong to China as do any cubs they have.

The cubs’ birth isn’t the only event being celebrated at the zoo this weekend. For Bao Bao’s second birthday Sunday she will get a cake made out of ice with the number “2” on top. She will stay at the zoo until she is four years old when she will return to China.