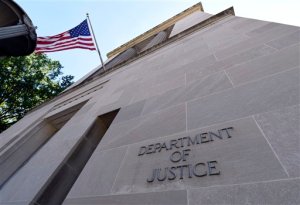 The view of the Justice Department in Washington, Thursday, Aug. 27, 2015. The Associated Press sued the U.S. Department of Justice Thursday over the FBI’s failure to provide public records related to the creation of a fake news story used to plant surveillance software on a suspect’s computer. (AP Photo/Susan Walsh)

WASHINGTON (AP) — The Associated Press sued the U.S. Department of Justice Thursday over the FBI’s failure to provide public records related to the creation of a fake news story used to plant surveillance software on a suspect’s computer.

AP joined with the Reporters Committee for Freedom of the Press to file the lawsuit in U.S. District Court for the District of Columbia.

At issue is a 2014 Freedom of Information request seeking documents related to the FBI’s decision to send a web link to the fake article to a 15-year-old boy suspected of making bomb threats to a high school near Olympia, Washington. The link enabled the FBI to infect the suspect’s computer with software that revealed its location and Internet address.

AP strongly objected to the ruse, which was uncovered last year in documents obtained through a separate FOIA request made by the Electronic Frontier Foundation.

“The FBI both misappropriated the trusted name of The Associated Press and created a situation where our credibility could have been undermined on a large scale,” AP General Counsel Karen Kaiser said in a 2014 letter to then-Attorney General Eric Holder.

“It is improper and inconsistent with a free press for government personnel to masquerade as The Associated Press or any other news organization,” Kaiser wrote. “The FBI may have intended this false story as a trap for only one person. However, the individual could easily have reposted this story to social networks, distributing to thousands of people, under our name, what was essentially a piece of government disinformation.”

In a November opinion piece in The New York Times, FBI Director James Comey revealed that an undercover FBI agent had also impersonated an AP reporter, asking the suspect if he would be willing to review a draft article about the bomb threats.

Comey described the tactic as “proper and appropriate” under Justice Department guidelines in place at the time. He said such a ruse would likely require higher-level approvals now than it did in 2007, but that it would still be lawful “and, in a rare case, appropriate.”

In a meeting with reporters the following month, Comey left open the possibility that an agent might again pose as a journalist, though he said such a tactic ought to be rare and “done carefully with significant supervision, if it’s going to be done.”

AP’s records request also seeks an accounting of how many times since 2000 the FBI has impersonated media organizations to deliver malicious software.

In a response to AP, the FBI indicated it might take nearly two years to find and copy the requested records. AP’s lawsuit asks a federal judge to order the FBI to hand over the records.

Thursday’s filing marked the second time this year that AP has sued the federal government. In March, the news organization sued the State Department to force the release of email correspondence and government documents from Hillary Rodham Clinton’s tenure as secretary of state. The case, involving unfulfilled FOIA requests dating back as long as five years, is ongoing.