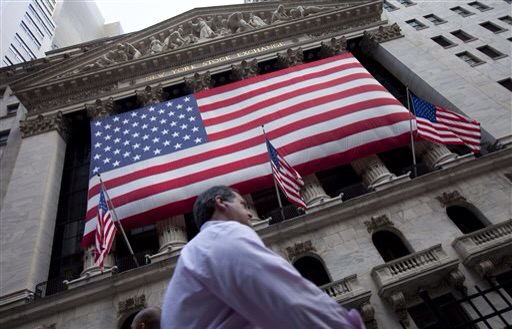 FILE – In this Monday, Aug. 8, 2011 file photo, a pedestrian walks past the New York Stock Exchange in New York. U.S. stocks are opening higher Monday, June 22, 2015 on hopes of a breakthrough in Greece’s bailout discussions with its creditors even as few tangible signs of progress emerged from meetings in Europe. (AP Photo/Jin Lee, File)

NEW YORK (AP) — U.S. stocks advanced Monday on hopes of a breakthrough in talks between Greece and its lenders. Eurozone finance ministers are hopeful a deal can be reached later in the week to avoid the Mediterranean nation defaulting on its debts. Stocks also got a boost from merger news in the health care and energy sectors.
KEEPING SCORE: The Dow Jones industrial average was up 106 points, or 0.6 percent, to 18,123 as of 3:44 p.m. Eastern time. The Standard & Poor’s 500 index climbed 13 points, or 0.6 percent, to 2,123 and the Nasdaq composite rose 37 points, or 0.7 percent, to 5,154.
GREECE IS THE WORD: Eurozone nations were cautiously optimistic on Monday that a deal on Greece’s bailout was within reach this week, easing fears that the country would default on its debt and leave the euro region.
Greece needs more loans from its fellow eurozone states and the International Monetary Fund to enable it to make a June 30 debt payment. The country has been negotiating for four months over what economic reforms it should undertake in exchange for the loans.
“An eleventh hour compromise was always the likely scenario and it looks like that is what we are getting,” said Russ Koesterich, global chief investment strategist at BlackRock.
EUROPE SOARS: The Greek stock market surged 9 percent and the yield on the 10-year Greek government bond dropped 1.48 percentage points to 10.90 percent as traders bought the bonds. The main stock indexes in Europe also closed broadly higher. Germany’s DAX and France’s CAC 40 each rose 3.8 percent and the U.K.’s FTSE 100 rose 1.7 percent.
HEALTHY DEAL: Health insurers Cigna and Anthem were sharply higher after Anthem made a $47 billion bid to buy its competitor. Anthem, which runs the largest Blue Cross Blue Shield health insurance network, was up $6.73, or 4 percent, to $171.86. Cigna was up $7.95, or 5 percent, to $163.29.
Cigna described the bid as “inadequate” and not in the best interests of its shareholders.
Other health insurers rose on speculation of more mergers in the industry. Aetna rose $6.80, or 4 percent, to $129.32.
ENERGY: Benchmark U.S. crude rose 41 cents to $60.38 a barrel on the New York Mercantile Exchange. Brent crude, a benchmark for international oil used by many U.S. refineries, fell 8 cents to $63.26.
The energy sector also had some merger news. Williams Cos. rejected a buyout offer from Energy Transfer Equity for $48 billion. Williams shares rose $11.46, or 26 percent, to $59.88.
IT’S A BUYOUT THING: Martha Stewart Living Omnimedia fell 95 cents, or 12 percent, to $6.15 after the company reached a buyout agreement with Sequential Brands. The company will be buying Martha Stewart’s company for $6.15 per share, or $353 million.
BONDS AND CURRENCIES: U.S. government bond prices fell. The yield on the benchmark 10-year note rose to 2.37 percent from 2.26 percent on Friday. The euro was little changed against the dollar at $1.1361, while the dollar was at 123.27 yen.
METALS: Precious and industrial metals futures mostly fell. Gold lost $17.80 to $1,184.10 an ounce, silver rose three cents to $16.14 an ounce and copper edged down less than a penny to $2.57 a pound.