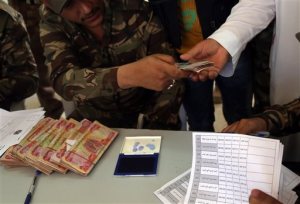 In this Wednesday, June 17, 2015 photo, Sunni tribal leaders receive their salaries in Habaniyah, 80 kilometers (50 miles) west of Baghdad, Iraq. A month after the fall of Ramadi, the Shiite-dominated Iraqi government is working to train and equip Sunni tribesmen from Anbar to fight the Islamic State group. In doing so, they must first repair a breach of trust that emerged from 18 months of neglect, which tribesmen say is the primary reason Ramadi fell into IS control. (AP Photo/ Khalid Mohammed)

HABANIYAH, Iraq (AP) — Parading across a desert base, hundreds of Sunni tribesmen who graduated a crash training course stood ready to take on the Islamic State group on behalf of a government that many believed left them to die at the hands of the extremists.

Among them were tribesmen who watched as Iraqi forces abandoned Ramadi a month ago to the Islamic State group. Their suspicions toward the Shiite-led government in Baghdad could be seen as they pushed forward to receive their first government salary in 18 months, with one brandishing a Kalashnikov assault rifle as he neared the front.

“For a year and a half we told them we need weapons, we need salaries, we need food, we need protection, but our requests were ignored until the disaster of Ramadi happened,” said Sheikh Rafa al-Fahdawi, one of the leaders of the Al Bu Fahad tribe of Anbar province.

But money and weapons alone won’t be enough to repair the mistrust between Baghdad and the Sunni tribes it now needs to battle the Islamic State group, which holds about a third of the country and neighboring Syria in its self-declared “caliphate.” After Iraqi forces abandoned Ramadi and then turned to Shiite militias for help, both sides remain suspicious of each other, threatening any effort to work together.

Iraq’s Sunnis long have complained of discrimination and abuse since the 2003 U.S.-led invasion that toppled Saddam Hussein’s Sunni-led dictatorship and replaced it with a government dominated by the country’s Shiite majority. But the collapse of Iraqi forces in Ramadi on May 17 crystalized the fears many Sunni tribesmen had when their pleas for help went unanswered.

That night, silence fell over Ramadi after weeks of Islamic State-launched suicide car bomb attacks and gun battles, said Sunni tribesmen who spoke to The Associated Press. The Iraqi forces there, including its vaunted special forces units, slipped out of the city, leaving Sunni tribesmen armed only with light weapons and their personal vehicles to battle the extremists, they said. The city quickly fell, forcing the tribesmen to flee.

“We felt there was no hope when the military left,” said Omar al-Fahdawi, a member of the Al Bu Fahad tribe from Ramadi. “For a year and a half we have been begging for government support, for weapons, for help. But we were forgotten.”

A senior Iraqi intelligence official and operations commander in Anbar province confirmed that counterterrorism forces were the first to pull out of Ramadi, abandoning 89 Humvees and armored cars, as well as rifles and mortars. The official said that the counterterrorism units were ambushed by some 200 militant fighters, breaking their line of defense and forcing them to withdraw, leaving the army and tribal fighters outnumbered and outgunned. The official spoke on condition of anonymity as he wasn’t authorized to brief journalists. Iraq’s Defense Ministry refused to comment.

The al-Fahdawis and many of their fellow tribesmen are now displaced and require government support for their families, most of whom now live in camps or temporary housing in the Anbar town of Khalidiyah.

But they are lucky compared to others. The Islamic State group has massacred hundreds of men, women and children with Anbar’s Al Bu Nimr tribe for resisting their rule and cooperating with the Iraqi government.

Yet despite being targeting by the Islamic State group, many of the Sunni tribesmen from Anbar who spoke to the AP said the Baghdad government viewed them as being complicit in the extremists’ advance, solely because they share the same sect.

Yet on Wednesday, 500 men from some of Anbar’s biggest tribes marched in formation at Iraq’s Habaniyah military base in the province’s western desert, part of a force the Iraqi government is quickly trying to make battle-ready.

As many as 80 U.S. advisers are now at Habaniyah, the first of a batch of 450 additional troops that President Barack Obama agreed to send to Iraq last week. The advisers declined to speak with journalists on hand for the ceremony.

Hameed al-Zerjawi, Iraq’s secretary-general for national security, said the American advisers will work with Iraqi security forces, which then will train militia fighters. He said the Americans will not engage directly with the militias.

That decision comes after Iraqi Prime Minister Haider al-Abadi summoned the Popular Mobilization Forces to Anbar after the fall of Ramadi. The government-backed fighters, made up predominantly of Iranian-backed Shiite militias, now outnumber Iraqi security forces in all of Iraq and are considered the most effective fighting force on the ground today.

But while the Popular Mobilization Forces insist they aren’t sectarian, human rights groups have accused individual Shiite militias fighting within the structure of harassing or attacking Sunni civilians, as well as destroying their homes and businesses.

Ali Khalil, a spokesman for the Iraqi national security apparatus and for the Popular Mobilization Forces in Anbar, acknowledged the fear Sunnis have of the militias, but said they were needed for the fight.

“The Shiites are stronger and larger than the Sunnis,” he said. “There are some mixed divisions, although none of them are here in Anbar.”

For those Sunni tribesmen at Habaniyah, that was little comfort.

“They are Iranian militias — nothing more,” said Majeed al-Fahdawi, Omar’s brother. “We’ve communicated our concerns to the government but they don’t listen. We’re seen as traitors if we speak against them.”