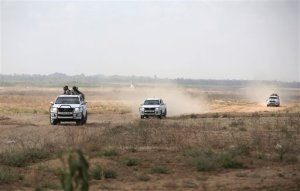 In this Wednesday, June 10, 2015 photo, Palestinian Hamas gunmen ride on the back of a pick-up truck as they patrol the border with Israel near the southern Gaza Strip town of Khan Younis. Nearly a year after a devastating war, Israel and Gaza’s Hamas rulers appear to have formed an unspoken alliance in a common battle against the shared threat of jihadis aligned with the Islamic State group. (AP Photo/Khalil Hamra)

KHAN YOUNIS, Gaza Strip (AP) — Nearly a year after a devastating war, Israel and Gaza’s Hamas rulers appear to have formed an unspoken alliance in a common battle against the shared threat of jihadis aligned with the Islamic State group.

While Israel and Hamas remain arch-enemies, both have an interest in preserving an uneasy calm that has prevailed since the fighting ended in a cease-fire last August — a stalemate that is largely the result of a lack of options on either side.

More than 2,200 Palestinians were killed in last year’s fighting, according to Palestinian officials, and Hamas suffered heavy losses. It is isolated internationally, Gaza’s economy is in tatters and reconstruction efforts have moved slowly. A renewal of hostilities would be devastating for Gaza’s 1.8 million people.

On the Israeli side, 73 people, including 67 soldiers, were killed in last year’s fighting, and the summer-long war disrupted the lives of millions of people as they coped with repeated rocket attacks and air-raid sirens. But Hamas, which seized power in Gaza eight years ago, has survived three wars, and the cost of toppling the group would be extremely high, so Israel appears content to contain Hamas and keep things quiet.

Hamas officials say that efforts are underway, through Qatari mediators, to work out a long-term cease-fire. The deal would call for Israel to ease a stifling blockade on Gaza in exchange for Hamas pledges to disarm, the officials said, speaking on condition of anonymity because they were discussing sensitive negotiations. It is unclear whether any progress has been made in the cease-fire efforts, which include Hamas demands to reopen sea and airports in Gaza. Israeli officials declined comment.

In the short run, the biggest threat to the quiet is a small but growing number of extremists in Gaza inspired by the Islamic State group, who have fired rockets across the heavily guarded frontier in order to undermine Hamas. The militants believe Hamas is soft on Israel and has failed to establish an Islamic state.

That has transformed Israel and Hamas — bitter enemies for nearly three decades — into unspoken allies against a shared threat.

Nowhere is this more evident than in the southern town of Khan Younis, where Hamas militants have been supervising work crews that are opening a road along Gaza’s eastern fence with Israel. The patrols have helped preserve quiet in a volatile area used in the past by rocket-launching squads.

The road work has been taking place as close as 150 meters (175 yards) from the border, an area that Israel in the past has made off-limits. In an unusual scene earlier this month, four Israeli military bulldozers entered a buffer zone to remove brush along the fence. Camouflaged Hamas militants approached the area but did not confront them.

“For sure, there are implicit, indirect understandings by both sides not to attack each other,” said Ibrahim al-Madhoun, a Gaza analyst who is close to Hamas. “The road is a message that there is a flexible political mind in Gaza (Hamas) that can take reasonable steps in the light of any regional or international changes.”

Such a scene would have been unthinkable a year ago, when Israel and Hamas battled for 50 days in their third war since the Islamic militant group — which is sworn to Israel’s destruction — seized power in Gaza in 2007.

Hamas has honored the cease-fire that ended the war. But a number of small jihadi groups have grown increasingly active in Gaza and appear set on disrupting the calm. They dream of joining Gaza to the IS group’s self-styled caliphate in Syria and Iraq, but because they are too weak to challenge Hamas directly, they have instead sought to undermine it by firing rockets at Israel.

Mkhaimar Abusada, a political science professor at Gaza’s Al-Azhar University, said the rocket fire is aimed at embarrassing Hamas and provoking Israeli military action against the ruling militant group. “Any confrontation will ease the security pressure Hamas put on the Salafists,” he said, referring to ultraconservative Islamic groups.

Israeli Prime Minister Benjamin Netanyahu has said he holds Hamas responsible for all attacks coming out of Gaza and threatened to use Israel’s “full strength” to respond. But so far, Israeli reprisals against the recent rocket fire have been limited to empty training sites, and there have been no casualties on either side.

The Israeli military declined to comment on the matter. But defense officials, speaking on condition of anonymity because they were not authorized to speak to the media, said they are aware of Hamas’ efforts to preserve the calm.

In addition to the border patrols, Hamas has arrested dozens of Salafi activists in recent months and set up checkpoints in sensitive areas to look for suspects.

Hamas officials say little about the road patrols. Mahmoud Zahar, a Hamas leader, said the action has helped improve security by preventing Palestinians from infiltrating into Israel and is helping “protect the properties” of people from Israel. He also said the road would help local farmers gain access to lands that could not easily be reached following the war.

“What they are broadcasting with those patrols is: ‘We are preventing friction with you (Israel),'” he said. “We are here to prevent fire on Israel.”

But he said the Hamas patrols are also collecting intelligence on Israeli military positions and soldiers. “So this could all in a second turn upside down and become a military offensive maneuver. But now their objective is the opposite,” he said.