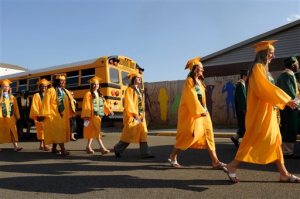 ADVANCE FOR SATURDAY, MAY 30, 2015 AND THEREAFTER – In this May 22, 2015 photo, graduating seniors head towards the football stadium prior to the start of their graduation ceremony in Louisa, Va. The class of 2015 spent nearly their entire high school career attending classes in modular trailers after the school was irreparably damaged in the 2011 earthquake. (Dave Ellis/The Free Lance-Star via AP)

As the last Louisa County High School senior crossed the graduation stage at The Jungle on May 22, the county closed another chapter of earthquake history.

The 317 seniors who compose Louisa’s Class of 2015 haven’t had a brick-and-mortar school of their own since August 2011_and that lasted only about a week.

On Tuesday, Aug. 23, 2011, the magnitude-5.8 earthquake_with an epicenter 4 miles southeast of Mineral_irreparably damaged their school building.

After a semester of sharing Louisa Middle School, high-schoolers moved into a 22-unit modular campus on the parking lot of the high school. The damaged building was demolished, and a new high school is nearing completion on the site.

Superintendent Deborah Pettit said the Class of 2015 will “go down in history” as a unique class because of the students’ attitude about being on the modular campus.

“They excelled in borrowed gyms, playing fields. They had to use the middle school’s stage for their productions. But they never missed a beat on anything,” Pettit said. “I never heard them complain about that, and I think it’s a testament to their resilience, their tenacity.”

Principal Lee Downey, who arrived at Louisa County High when this graduating class did, said he feels a special bond with these seniors because they are the first graduating class he has overseen from beginning to end.

“They have been a class of perseverance, of fight and willing to do what it takes to succeed,” Downey said. “They’re just winners. They’re just going to do great things inlife, and I’m just excited for them overall.”

Downey presented a painted mosaic of the class at their graduation rehearsal. The mosaic will be displayed in the new school building, which is set to open in August.

“He told them, ‘You are the heart and soul of Louisa County High School. You weren’t in the building, but you are Louisa County, so we’re going to immortalize you in the new building,'” Pettit said.

The $43 million facility, funded in part by state and federal grants, won’t be something the Class of 2015 can experience as students. And future classes won’t be held on the modular campus, which will be dismantled beginning in June.

Greg Dorazio, public information specialist for Louisa schools, said the campus will be returned to its original state as a parking lot, per FEMA regulations.

Though the new building will have state-of-the-art technologies and facilities that Downey said “will bring us closer together as a family,” graduating students didn’t express too much jealousy about missing the experience.

“I wish we could’ve been in the high school, but whatever,” said graduate Nicholas Seemiller. “C’est la vie.”

Graduates Courtney Collins and Elizabeth Grandstaff said they wouldn’t miss the pods. They said the modular campus had really just been a temporary shelter for the family that is Louisa County High School.

But on the last day they could be high schoolers, Courtney and Elizabeth had a more important topic to consider than the pods or nearby construction site: the future.

“We get to go off and be independent and start new things,” Courtney said, “and get a fresh start on our lives, really.”

Information from: The Free Lance-Star, http://www.fredericksburg.com/