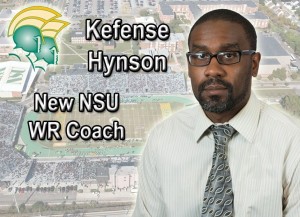 Hynson has collegiate experience coaching receivers, quarterbacks, running backs, tight ends and defensive backs. He has worked at the Division I FBS and FCS and Division II levels in addition to several internships in the NFL.

“We took our time with the search for this position and we feel like we made a quality hire,” Scott said. “Kefense’s background speaks for itself. He has an excellent pedigree. We are excited to have him and his family join our program.”

Hynson comes to NSU after spending three seasons at the University of Montana, including the last two years as co-offensive coordinator and quarterbacks coach. In his first season with the Grizzlies, he coached the tight ends and special teams.

The previous year, Johnson passed for 32 touchdowns and 3,387 yards, both of which ranked among the top five single-season totals in school history.

Before joining the Montana staff, Hynson coached the wide receivers at Yale from 2009-11. That followed a three-year stint at Division II Western Washington (2006-08), where he served as offensive coordinator for the final two seasons. Hynson’s offense in his final season at Western Washington averaged 404 total yards, nearly 30 points a game and had 29 touchdown passes.

Hynson was running backs coach at Minnesota State in 2005 and director of football operations at Boise State in 2004 when the Broncos went 11-1, won the WAC title and were ranked in both major polls. He has also had assistant coaching jobs at Quincy (defensive backs coach, 2004) and Willamette (assistant receivers coach, 2003) and completed NFL minority coaching fellowships with Seattle (2008), Oakland (2009), Kansas City (2010), Houston (2013) and Detroit (2014).

Hynson was selected to participate in the 2009 NCAA Football Coaches Academy and the 2011 NCAA Expert Forum.

Hynson was an honorable mention All-America defensive back at Willamette College in Oregon. He was a three-time Northwest Conference all-star and served as team captain before graduating with his bachelor’s degree in history in 2003.

An Oakland, Calif. native, Hynson and his wife, Shanina, have three children: Jade, Myles and Layla.