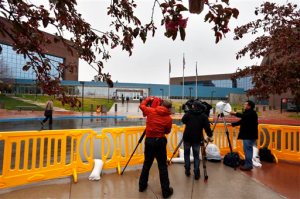 Television journalists film from within a media corral in front of the Arapahoe County Justice Center, on the first day of the trial of Aurora movie theater shootings defendant James Holmes, in Centennial, Colo., Monday April 27, 2015. As the trial begins, the key won’t be whether he caused the carnage, but whether Holmes was sane at the time of the killings. (AP Photo/Brennan Linsley)

About 420 people were watching a midnight showing of “The Dark Knight Rises” on July 20, 2012, in the Denver suburb of Aurora when Holmes tossed gas canisters into the audience and opened fire. Holmes surrendered to police outside the theater. His attorneys acknowledged he was the gunman but said he was in the grip of a psychotic episode.

Holmes pleaded not guilty by reason of insanity, which under Colorado law means he acknowledges committing the acts but believes he wasn’t responsible because he couldn’t tell right from wrong.

If Holmes is convicted of murder, he could be sentenced to execution — which prosecutors want — or to life in prison without the possibility of parole. If he’s found not guilty by reason of insanity, he would be committed indefinitely to the state mental hospital. That means if he were some day declared to be sane, he could be released, although experts say that’s unlikely.

Under Colorado law, the jury will determine whether Holmes was sane or insane. If they find he is guilty, they will decide on the sentence — death, or life without parole.

The judge seated 12 jurors, plus 12 alternates who would replace any jurors who had to be dismissed for health or other reasons. All 24 will not know if they are jurors or alternates until deliberations are about to begin. A that point, the remaining alternates will be dismissed.

Over the next four months or longer, jurors will be shown graphic crime scene photos and hear harrowing testimony from witnesses and survivors. They’ll be allowed to go home every night but they can’t discuss the case with anyone or see or read anything about it. Counseling will be available to the jurors, but only after they’ve reached a verdict and the trial is over.

WHY HAS IT TAKEN SO LONG?

It took 2½ years for the judge, the prosecution and the defense to plow through the mountain of evidence and hash out numerous legal questions. Further complicating matters were the number of victims, the prosecution’s decision to seek the death penalty and Holmes’ decision to plead insanity. It took nearly three more months to choose the jury after 9,000 summonses were sent.

WHY WAS THERE NO PLEA AGREEMENT?

Holmes offered to plead guilty if prosecutors would agree to a life sentence without parole. Prosecutors rejected the offer.

WHY DON’T WE KNOW MORE?

A judge issued a gag order days after the shooting that prevented prosecutors, defense lawyers and investigators from speaking publicly about the case. Many police reports and most evidence has been sealed, including the results of two court-ordered sanity evaluations of Holmes. A torrent of information will become public at trial.