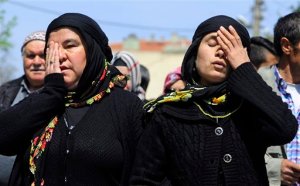 FILE – In this Wednesday, April 15, 2015 file photo, families of victims of a mine disaster arrive at the trial in Akhisar, Turkey. Forty-five managers and employees of a mine in the western Turkish town of Soma, went on trial on Wednesday accused of causing the deaths of 301 miners who perished in a fire last year in Turkey’s worst mining disaster. (AP Photo/Emre Tazegul, File)

LONDON (AP) — The sheer scale of the migrant exodus across the Mediterranean forced the issue higher on the agenda of European governments during the week, especially after 400 desperate people were believed to have died in one shipwreck.

In South Africa, migration by land was an explosive issue, as resentful residents of Johannesburg turned violently against newcomers from other African nations.

And in Somalia, a suicide bomber followed by a half-dozen gunmen attacked a government office complex in the capital, Mogadishu. Eight civilians, two soldiers and seven attackers died.

Something different in Brussels: a European Central Bank briefing was disrupted by a female protester, who jumped on to a desk to briefly confront ECB President Mario Draghi.

Large animals flexed their muscles. A bull upended bullfighter Tomas Angulo in Spain, while horses competed in a log-pulling contest in Bosnia.

From Moscow, a sentiment millions might share: “Dona nobis pacem,” Latin for “grant us peace,” was staged by dancers at the Bolshoi Theater.