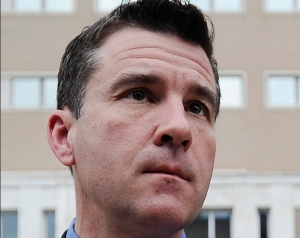 In this Friday, April 17, 2015, file photo, A. Ryan McGuigan, attorney for Robert Gentile, stands outside federal court, in Hartford, Conn. A federal prosecutor said, Monday, April 20, 2015, that McGuigan’s client Gentile told an undercover FBI agent that he had access to two paintings stolen from Boston’s Isabella Stewart Gardner Museum in 1990 and was willing to negotiate a sale of individual works for $500,000. A judge ordered Gentile detained following his arrest Friday, April 17, on weapons charges.

HARTFORD, Conn. (AP) — A reputed mobster told an undercover FBI agent that he had access to two of the long-sought paintings stolen from Boston’s Isabella Stewart Gardner Museum in 1990 and could negotiate a sale of each for $500,000, a prosecutor said Monday.

Robert Gentile, a 79-year-old convict from the Hartford, Connecticut, suburbs with a criminal record dating to the 1950s, allegedly made the offer following his release from prison a year ago, prosecutor John Durham said.

The subject of the biggest art heist in U.S. history arose at a hearing in Hartford as the prosecutor argued against releasing Gentile, who was arrested Friday on allegations that he sold a handgun for $1,000 to an informant with a murder conviction. The heavyset, gray-haired defendant who appeared in a wheelchair and a tan prison jumpsuit was ordered held without bail.

Gentile’s attorney, A. Ryan McGuigan, said his client began working with the FBI 3 1/2 years ago to help find the stolen artwork. But because the FBI believes Gentile has not been forthcoming with everything he knows about the heist, McGuigan said, the agency has set up his client for arrests twice in the last three years.

“It’s my argument that a crime isn’t committed if it’s not orchestrated by the FBI,” said McGuigan, who said his client is not withholding any information.

Over the last 25 years, the FBI has chased thousands of leads around the world in the investigation into the theft of works worth an estimated $500 million, including Rembrandt’s “Storm on the Sea of Galilee.” Gentile’s alleged assertions would suggest significant new evidence, but it’s unclear what came of the offer to negotiate the artworks’ sale, and the U.S. attorney’s office declined to comment on how it was interpreted by investigators.

On March 18, 1990, two men posing as police officers stole 13 pieces of art including paintings by Edouard Manet, Edgar Degas and Johannes Vermeer. The paintings have never been found and nobody has been charged in the robbery.

Two years ago, the FBI in Boston said investigators believed the thieves belonged to a criminal organization based in New England and the mid-Atlantic. They believe the art was taken to Connecticut and Pennsylvania in the years after the theft and offered for sale in Philadelphia. After that, the trail went cold.

The museum is offering a $5 million reward for the return of the artwork, and the government is offering immunity from prosecution.

Durham, who said Gentile has sworn an oath to the Philadelphia Mafia, said at the hearing that Gentile lied to the FBI about the missing pieces. He said Gentile told the undercover agent that he believed federal law enforcement would come after him even if he gave up information on the art.

McGuigan said if his client had information on the artwork, he would have given it up to be with his ill daughter, who died while he was in jail. In 2012, the FBI fruitlessly searched Gentile’s property in Manchester, Connecticut, even using ground-penetrating radar.

As he ordered Gentile to be detained without bail on the gun charge, Judge Thomas Smith said the Gardner paintings were not a focus of the case before him. But he told the defendant that he was alarmed by the level of Mafia-related criminal activity attributed to him by prosecutors.

“There’s a time when an old boxer hangs up his gloves,” he said. “If in fact what Mr. Durham says is true, and you were a member, it’s time that you took senior status.”