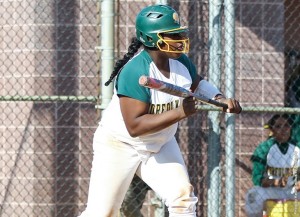 BALTIMORE, Md. – Norfolk State survived two different crazy endings in its doubleheader against Morgan State on Saturday afternoon, and the Spartan softball team came away with a pair of one-run victories over the Bears at Lois T. Murray Field.

NSU earned a 7-6 victory in 10 innings in the first game and then won game 2, 6-5. Both times, Morgan State scored four runs in the bottom of the last inning to force the Spartans to sweat out the wins. And both times, MSU had the winning run on base but was unable to even tie it up, including in the second game when the Bears had the winning run on second with no outs.

Thanks to Hampton’s loss at Howard on Saturday, NSU is now the only team in the MEAC Northern Division with one loss or fewer. The first-place Spartans own a 7-1 conference mark and an 8-17 overall record on the season.

Game 1 of Saturday’s doubleheader certainly proved to be full of drama. Down by one, Morgan State scored in the bottom of the seventh to force extra innings. The Spartans then put a five-spot on the board in the 10th, only to watch the Bears score four runs of their own. Morgan State (3-22, 2-4 MEAC) had the winning run on base when NSU recorded the last out of the game.

The Spartans, though, were able to overcome that thanks to their five-run 10th, all with two outs. With runners on first and second, junior third baseman Whitney Williams hit her second double of the game to drive in a pair. She went to third on sophomore first baseman Kayla McNair‘s single and then scored when sophomore shortstop Mikki Haury followed with a base hit to left field.

NSU added two more runs when freshman Megan Przeslawski also hit her second double of the game, a shot to center field that plated both McNair and Haury. Now up 7-2, NSU had to work out of a jam in MSU’s half of the frame.

The Bears loaded the bases and then scored one run on a foul out and two more thanks to a triple by Kimber Salvas. An RBI single by Alyssa Blanco made it 7-6, and Morgan State put runners on first and second on an error on the Spartans. NSU starter Liz Rileygot Audrianna Alvarez to hit into a fielder’s choice, though, to end the game.

All of that came after Claudette Tanabe-Smith hit an RBI double in the bottom of the seventh for MSU. Smith got thrown out at third trying to stretch the hit into a triple, but not before Kate Vosper crossed home plate with the tying run.

Smith did triple and score in the second for an early 1-0 Morgan State lead, only to watch NSU score two in the top of the fourth. Williams doubled to lead off the inning and later scored on Przeslawski’s two-bagger. Senior catcher Sommer Di Fulgo followed with an RBI double for a 2-1 Spartan advantage.

NSU was again unable to avoid the drama in the nightcap. This time, though, the Spartans built an early lead and did not need to score late to pull away. A four-run second inning did most of the damage.

McNair, Przeslawski and Haury singled to start the inning to load the bases. Freshman second baseman Seana Moriarty hit a sacrifice fly to get NSU on the board, and the second run of the inning came home on an error on the Bears. Senior center fielderAlina Moriarty drove in two more runs with a triple to center.

Morgan State scored a run in the third before McNair’s RBI groundout in the fifth made it 5-1. NSU tacked on an insurance run in the seventh on McNair’s RBI double before MSU made the Spartans sweat it out in the bottom half of the inning.

The runners stayed put on Salvas’ groundout to first, and then a wild last at bat ensued. Sitting at third, Kimberly Fontaine attempted to score on Blanco’s hit to the pitcher but was thrown out at the plate. Blanco, meanwhile, attempted to make her way to second on the play but was also caught off base to end the game.

NSU had 21 hits on the day, including five from Williams and four off the bat of Przeslawski. Williams went 4-for-5 in the first game with two runs and two RBI. Przeslawski went 2-for-5 and drove in three runs in the first game. Both players also had three doubles over the course of the day.

Riley (2-8) won game 1 after pitching all 10 innings. She allowed six runs, five earned, on 13 hits with eight strikeouts. FreshmanMarissa Marrero won the second contest, pushing her record to 6-9 after giving up five runs, three earned on 10 hits with five K’s in all seven innings.

Danielle Pitpit batted 4-for-4 for the Bears in the second game.

The two teams will finish out the series on Sunday at noon.