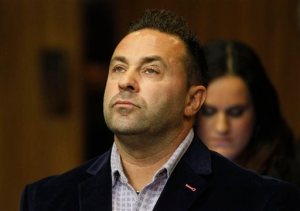 FILE – In this Oct. 15, 2014 file photo, Giuseppe “Joe” Giudice, from the television show “Real Housewives of New Jersey”, stands during a hearing in the Passaic County Courthouse in Paterson, N.J. Giudice lost his driver’s license for two years as he’s preparing to head to federal prison for bankruptcy fraud. A state judge on Thursday, April 2, 2015, called Giudice’s driving record the worst he’s ever seen. He also fined Giudice the maximum $10,000. Giudice pleaded guilty in October to unlawful use of an ID and impersonation. (AP Photo/The Star-Ledger, William Perlman, Pool)

PATERSON, N.J. (AP) — A “Real Housewives of New Jersey” husband preparing to head to federal prison for bankruptcy fraud had his license suspended for two years by a state judge who called his driving record the worst he’s ever seen.

Joe Giudice lost his driver’s license and was fined the maximum of $10,000. He pleaded guilty in October to unlawful use of an ID and impersonation. His guilty plea included an 18-month sentence.

Superior Court Judge Adam Jacobs said Joe Giudice has a “general disrespect for the law,” citing dozens of previous driving infractions and suspensions. He said he came close to rejecting the plea deal with prosecutors but wanted to follow a federal judge’s intention to allow Giudice to remain free while Teresa is in jail so he can care for their four daughters.

The judge said Giudice is permitted to drive home from court but will be sent to jail immediately if he drives again after that.

Prosecutors in Passaic County said Giudice used his brother’s identity to obtain a driver’s license while his own was suspended for driving while intoxicated in 2010.

The Giudices pleaded guilty in the federal case in March 2014, admitting they hid assets from bankruptcy creditors and submitted phony loan applications to get some $5 million in mortgages and construction loans. Joe Giudice also pleaded guilty to failing to pay taxes totaling more than $200,000. The couple also was ordered to pay restitution of more than $400,000.

Joe Giudice is an Italian citizen by birth who never became a U.S. citizen. He is expected to be deported once his prison term ends.