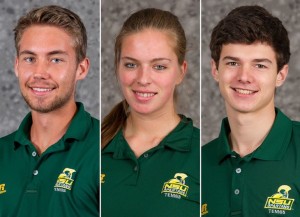 NORFOLK, Va. – Norfolk State swept the rookie of the week awards, and senior Daniel Grauel was also named the player of the week as the MEAC announced its weekly tennis honors on Wednesday afternoon.

Grauel defeated Nicholas Brobst of UMES by a 6-0, 6-0 score last Friday at the No. 2 singles position, and followed that up with another 6-0, 6-0 victory on Saturday. Grauel defeated David Ogan of Coppin State at the fourth spot in the lineup.

Pejic also competed in singles in both matches. He won at the No. 1 spot versus UMES, 6-0 and 6-0, against Michael Cha. At the No. 3 position against Coppin State, Pejic earned a 6-1, 6-1 triumph over Gavin Lewis.

Cvjetkovic faced little resistance in her two matches against UMES and Coppin. Both times competing at the No. 1 spot, she swept Melequa King of UMES, 6-0 and 6-0, as well as Carentxa Goede of Coppin State, 6-0 and 6-1.

Both squads will take on North Carolina A&T on Friday at 1 p.m. at Centre Court Racquet Club in the last MEAC regular season matchup of the season.