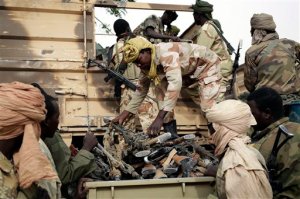 FILE-In this file photo taken on Wednesday March 18, 2015, Chadian soldiers collect weapons seized from Boko Haram fighters in the Nigerian city of Damasak, Nigeria. Hundreds of civilians, including many children, have been kidnapped and are being used as human shields by Boko Haram extremists, a top Nigerian official confirmed Wednesday, March 25, 2015. (AP Photo/Jerome Delay, File)

BERLIN (AP) — The U.N.’s human rights chief said Wednesday, April 1, 2015, his office has received reports that Boko Haram fighters retreating from advancing military forces in Nigeria murdered women and girls they had taken as “wives,” along with other captives.

The recapture of parts of northeastern Nigeria in recent weeks “has brought to light gruesome scenes of mass graves and further evident signs of slaughter by Boko Haram,” Zeid Raad al-Hussein told a special session of the U.N. Human Rights Council in Geneva.

Zeid gave no further details of what he said were multiple reports of fighters killing “their so-called ‘wives’ — in fact, women and girls held in slavery — and other captives.” Boko Haram’s reported use of children as “expendable cannon fodder” and human bombs would, if confirmed, constitute war crimes and crimes against humanity, he said.

Zeid said there also are “persistent and credible reports” of serious rights violations by Nigerian and other security forces responding to Boko Haram. He called for “thorough and fully transparent investigations” by authorities.

The Islamic extremist militants have terrorized northern Nigeria and also attacked towns in neighboring countries, prompting nations in the region including Chad and Niger to put together a force to combat them.

Zeid said he is “profoundly concerned about the growing ethnic and sectarian dimensions of the conflict.”

Boko Haram’s original leader was from the Kanuri ethnic group, and the U.N. human rights office has received reports “indicating that Kanuris are now considered suspect by some military personnel,” resulting in arbitrary arrests and abuse, Zeid said.

Boko Haram, meanwhile, has begun targeting Nigerians of Shuwa Arab origin “apparently in retaliation for their perceived support to the Nigerian armed forces,” he said.

“There is thus a high risk of escalating ethnic and religious violence,” Zeid said. “This can only be halted by principled leadership and clear instructions to military personnel, with appropriate accountability.”