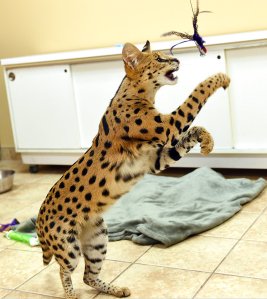 This Nov. 7, 2017 photo shows an African Serval cat rescued from the streets of Reading, Pa., by the Animal Rescue League of Berks County. Police captured the big African cat, resembling a cheetah, running loose through the streets. The cat was transported to a big cat rescue facility that can give it the special diet and extensive exercise it needs.
( Tim Leedy/Reading Eagle via AP)

Reports about the spotted feline started coming in on Nov. 3 in Reading, about 60 miles (97 kilometers) northwest of Philadelphia. When officers tracked it down, they initially thought they’d found a cheetah.

The Animal Rescue League of Berks County says they got a call from the city’s police department about the big cat on Saturday.

When staff responded, they found a cat called an African serval. The cats are illegal to own in Pennsylvania without a license, and the state’s game commission says no one in Berks County has such a license.

The 1- to 2-year-old female was declawed and very friendly, leading animal workers to presume it had been a pet, raised in a home since it was a kitten.

The animal could be worth $20,000 to $30,000 on the black market, said Tom Hubric, the animal rescue league’s interim executive director.

He speculated the owner may have wanted to breed the serval with a domesticated cat to create what’s called a Savannah cat. Those are legal to own, he says.

The cat was transported Thursday to a big cat rescue facility that can give it the special diet and extensive exercise it needs.

“She’s just a magnificent animal and she’s captivated everyone who has seen her,” Hubric said.