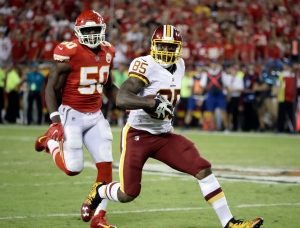 FILE – In this Monday, Oct. 2, 2017 file photo, Washington Redskins tight end Vernon Davis (85) is chased by Kansas City Chiefs linebacker Justin Houston (50) during the second half of an NFL football game in Kansas City, Mo. Jay Gruden will have what Vernon Davis is having. Marveling at the physical condition of the 33-year-old tight end, the Washington Redskins coach asked Davis what he had for lunch and came away saying, “We should all get on the Vernon Davis diet.” Davis is careful about what he eats, trains his body and his mind and is on pace for one of his better seasons in his 12th year in the NFL. (AP Photo/Charlie Riedel, File)

ASHBURN, Va. (AP) — Jay Gruden will have what Vernon Davis is having.

Marveling at the physical condition of the 33-year-old tight end, the Washington Redskins coach asked Davis what he had for lunch and came away saying, “We should all get on the Vernon Davis diet.” Davis is careful about what he eats, trains his body and his mind and is on pace for one of his best seasons in his 12th year in the NFL.

Davis goes into Washington’s game Sunday against the Dallas Cowboys leading the league with 19.5 yards a catch. Kirk Cousins said he and fellow quarterback Colt McCoy call Davis “El Caballo” — Spanish for horse — “because he’s like a thoroughbred the way he runs down the field.”

“We always talk about his hamstrings and how they’re like the hamstrings of a 19-year-old,” Cousins said. “Special player. … He’s a great player, but he’s a better person. He’s not a guy who acts entitled. He’s a guy who could at his age and experience level. He is just very humble, hungry and is just a fun guy to play football with.”

Davis is having his share of fun right now, whether it’s yucking it up in the locker room with 24-year-old defensive lineman Anthony Lanier, or mentoring fellow tight ends Jordan Reed and Niles Paul. Long past his prime with the San Francisco 49ers, Davis already has 15 catches for 292 yards and a touchdown through six games and is stretching the field the way a player at his position and age isn’t supposed to.

Reed is still the No. 1 passing option in Gruden’s tight end-happy offense that the 27-year-old star thinks works well because of Davis’ presence.

“Vernon, he’s a very talented player, very explosive,” Reed said. “When both of us are on the field, one of us is going to have a matchup that can be taken advantage of.”

Davis is taking advantage of something, whether it’s a favorable matchup or opponents not expecting him to show off such speed. When Reed missed a game with a shoulder injury, Davis filled the top spot and had five catches for 58 yards.

The Redskins have had their fair share of injuries this season, but not to Davis, who doesn’t mind sharing his secrets for staying healthy.

“Everything that I do during the season — massage, chiropractor, dry needling, acupuncture — I do all those things during the offseason as well, consistently,” Davis said. “I think over time you’ll see the benefits if you just continue to be consistent with it, and that’s what I’ve been doing since I’ve been in the league, as well as eating the proper nutrition. That’s vital. It plays a key role in being able to sustain and stay on the field and remain healthy. I do that and I just try to do my best.”

Davis said last season he could see himself playing six more years, and he wasn’t joking. Gruden takes Davis seriously from watching how the veteran “runs around like a 20-year-old kid.”

“The guy’s a freak,” Gruden said. “He’s the most impressive guy I’ve been around really as far as taking care of his body, and whatever he’s doing, he needs to tell all our young guys to do it because he’s amazing.”