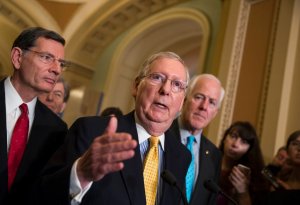 WASHINGTON (AP) — President Donald Trump and GOP leaders insisted Tuesday the Senate will vote soon on legislation to repeal and replace “Obamacare.” But even as senators headed toward the make-or-break vote before the Fourth of July, deep uncertainty remained about whether the emerging legislation would command enough support to pass.

Meeting with Republican congressional leaders at the White House, Trump praised the House for passing its own version of the health legislation early last month, and encouraged the Senate to do to the same.

Earlier, GOP senators emerged from a lunch meeting with Vice President Mike Pence claiming they were finally nearing consensus on their long-promised legislation to undo major portions of the health overhaul approved seven years ago by Democrats and President Barack Obama. At the meeting they reviewed legislative options with the goal of translating those into bill language that could be evaluated in the near future by the Congressional Budget Office.

“We’re getting close to having a proposal to whip and to take to the floor. It’s been seven years to talk about health care,” McConnell, R-Ky., told reporters.

“Doing nothing is not an option,” McConnell said.

At the same time, enough uncertainty remained about whether they would be able to pass a bill that they also spent time discussing a fallback plan that would involve a stopgap measure to stabilize insurance markets, senators said. This would give lawmakers more time to tackle broader health care system problems. With Democrats unanimously opposed to their plans, Senate Republicans can lose only two votes and still pass a bill.

“I would support short-term measures that stabilize markets and give us time,” said Republican Sen. Ron Johnson of Wisconsin. “It’s a very complex system. We don’t have time to do this in a couple of weeks.”

Republicans and Trump himself are eager to move on to other issues, particularly tax reform, after health care has monopolized the House and then the Senate for the past several months.

At the White House, GOP congressional leaders and the president discussed their agenda, “to both get health care moved ultimately to the president’s desk and then to focus on cutting taxes and get the economy growing,” said House Majority Whip Steve Scalise, R-La.

There was also discussion of an upcoming increase in the debt limit, leaders said. The topic of former FBI Director James Comey’s upcoming testimony on Capitol Hill was not raised, the leaders said, though Trump was asked about it beforehand and wished Comey luck.

Despite years of promises to get rid of Obama’s health law, Republicans have discovered that doing so is much more difficult than anticipated. The legislation that passed the House has few fans in the Senate. Though it does eliminate unpopular mandates, reduce the deficit and result in lower premiums for some consumers over time, it also kicks 23 million people off the insurance rolls over a decade.

Republican aides say privately they are working within the general framework of the House bill, but considering significant changes. For example, it’s expected the Senate legislation would set a limit on future federal spending for Medicaid, the federal-state health care program for low-income people. As in the House bill, the Senate is considering a per-person spending limit, known as a per-capita cap.

But among the options being considered by the Senate would be exempting from the cap the spending for some categories of Medicaid beneficiaries. Some Republican governors have proposed that the elderly, the disabled, pregnant women and children be exempted from any cap.

Other options being considered would change the tax credits the House bill offers to help people purchase private health insurance. In the House bill, tax credits are based primarily on age. But senators are also considering other factors, such as income and where a person lives. Health care costs vary dramatically around the country.

“I think there’s a consensus on parts of the plan. Whether we’ll be able to get consensus on the whole, we’ll see,” said Sen. John Kennedy, R-La.

“The areas we have consensus on? Obamacare sucks,” Kennedy said. “Look, I think President Obama and my friends on the other side of the aisle were very well-intentioned in passing the Affordable Care Act. But you know what? One hundred fifty years ago doctors used to bleed their patients with the best of intentions. They stopped it because their patients died. The Affordable Care Act has not worked.”