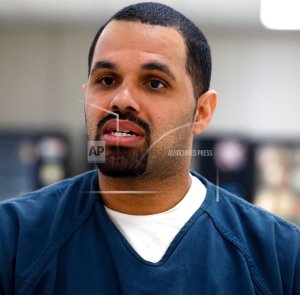 FILE – In this May 7, 2014 file photo, Rene Lima-Marin sits for an interview with The Associated Press about the circumstances of his sentencing and incarceration, in a meeting room inside Kit Carson Correctional Center, a privately operated prison in Burlington, Colo. Lima-Marin was sent back to prison after being mistakenly released 90 years early. On Tuesday May 16, 2017, a judge ordered him released from prison again, saying it would be “draconian” to keep him behind bars and that he has paid his debt to society. (AP Photo/Brennan Linsley, File)

DENVER (AP) — The detention of a Cuban immigrant set to rejoin his family after he was mistakenly released from prison, then put back, has raised questions about whether more people from the island nation will be deported from the United States now that relations between the two countries have thawed.

The U.S. Immigrations and Customs Enforcement took custody of Rene Lima-Marin, 38, Wednesday after a judge ordered him to be released from state prison in an armed robbery case. The agency said Thursday it is working to deport him to the country he left as a toddler along with thousands of other Cubans in 1980 in what became known as the Mariel boat lift.

But it’s not clear whether Lima-Marin, who was ordered deported while in prison, will be returned there since the U.S. Department of Homeland Security has little power over cases of deportation of Cuban nationals.

Under a 1984 agreement, Cuba agreed to take back 2,746 of their citizens who came to the United States as part of the boat lift. Cubans convicted after then, such as Lima-Marin, are not automatically accepted by Cuba because of that deal.

Officials say more than 36,000 Cubans are facing orders of deportation for conviction of crimes or immigration violations. About 600 are in custody of Immigration and Customs Enforcement, according to statistics by the agency.

People who cannot be deported have been allowed to remain and live freely in the United States but check in regularly with immigration officials.

Obama also ended the “wet foot, dry foot” policy enacted by President Bill Clinton in 1995 which gave preferential immigration treatment to Cubans, allowing any of them who reached the United States to remain in the country.

Sebastian Arcos, associate director of the Cuban Research Institute, says the end of that policy did little to settle rules for repatriation. U.S. officials said in January the repeal of the policy dealt more with cases going forward, and acknowledged Cuba would continue to review case by case when the U.S. government sought deportations.

“He is in trouble now because of the result of the normalization process which is opening up the possibility, but legally there is no agreement between the two countries to exchange criminals, so he might be in limbo,” Arcos said. “No one knows what’s going to happen in the new administration.”

President Donald Trump has been critical of Obama’s efforts to improve relations with Cuba. He has promised to re-evaluate the agreements with Cuba although proceeding on the path set by Obama could possibly make it easier to eventually deport immigrants from Cuba.

Lima-Marin was convicted in 2000 of multiple robbery, kidnapping and burglary counts after he and another man robbed two video stores at gunpoint. He was mistakenly released on parole in 2008. He then held a steady job installing glass, got married and has a stepson, Justus, 10, and son JoJo, 7, who was born while he was out of prison.

Authorities realized the mistake in 2014 and returned him to prison.

A judge on Tuesday ordered Lima-Marin’s release, saying it would be “draconian” to keep him in prison and that he had paid his debt to society. But ICE can request that an inmate suspected of an immigration violation be held after their release from jail or prison under a form referred to as a hold or a detainer.

His wife, Jasmine, said she remains hopeful the family will be reunited “sooner rather than later.”

She said Lima-Marin checked in with immigration officials every few months after he was mistakenly released from prison in 2008 but deportation was not a concern then.

“If all these things hadn’t changed under Trump I could think that it’s a misunderstanding that would be cleared up. But now we don’t know what’s about to happen,” she said.