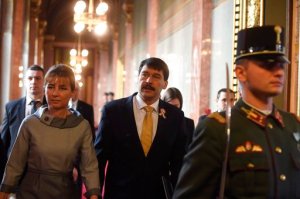 Hungarian President in office Janos Ader, center, and his wife Anita Herczegh arrive to the plenary session of the unicameral Hungarian Parliament in Budapest, Hungary, Monday, March 13, 2017, when the deputies elect the President of Hungary for the next term of five years. Janos Ader is up against candidate of the opposition coalition Laszlo Majtenyi for the post. (Szilard Koszticsak/MTI via AP)

A second round was needed because Ader fell two votes short of the 133 votes needed for a two-thirds majority in the first round. Only a simple majority was needed to win in round two.

The 57-year-old Ader is a former parliamentary speaker and member of the European Parliament. He became president in May 2012, after the departure of former Olympic fencing champion Pal Schmitt, who resigned after 20 months in office because of a plagiarism scandal.

Ader has often spoken out on issues related to environmental protection and ensuring the global water supply.

In March last year he clashed with the government over legislation which would have shielded from scrutiny hundreds of millions of dollars of public funds used by foundations set up the National Bank of Hungary. Critics accused the central bank, headed Gyorgy Matolcsy, of using the foundations to distribute money to friends and supporters and of splurging on real estate deals and other non-banknig activities. Ader sent the legislation for review to the Constitutional Court, which later struck down the legislation..

“He could have made his voice heard more often and noted his criticism in symbolic terms, but he could hardly block legislation,” said Csaba Toth, strategic director of the Republikon Institute think tank. “After Schmitt, he played a dignified role.”

The government has accused Soros and numerous non-governmental organizations he supports — including corruption watchdog Transparency International and the Hungarian Helsinki Committee, a human rights advocate — of trying to unduly influence Hungarian politics. Legislation targeting those and similar groups is expected to be debated in parliament within weeks.

Majtenyi criticized a wide range of Orban’s policies, including the educational, press and cultural freedoms “stolen” by Orban’s seven-year government, as well as the nationalization of the funds once belonging to private pension schemes.

“Corruption has crushed the state,” Majtenyi told lawmakers. “We would like a free and solidary Hungary. My ideal is the smallest possible state and the most possible solidarity.”

Majtenyi jokingly said he could ask parties whose leaders received support from Soros to vote for him, since Orban briefly studied at Oxford University in 1989 thanks to a Soros-backed scholarship.

Hungary’s Basic Law, or Constitution, alllows the president to serve for a maximum of two terms.

Orban will seek to win his fourth four-year term as prime minister in April 2018.