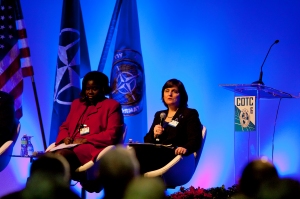 Vice President Chief Innovation Officer Gina Loften of IBM offers NATO planning leaders her view of the rapid pace of change and the types of technologies that are driving that change. Photo by Malina Scacchi, Spartan Echo multimedia editor.

The North Atlantic Treaty Organization’s Allied Command Transformation opened their doors to the student press for their Chiefs of Transformation Conference in Norfolk, Virginia on Wednesday, Dec. 14. NATO is one of the world’s largest international institutions and defensive organizations that is made up of 28 member countries from Europe and North America.

When speaking on NATO’s recent Warsaw Summit, the ACT conference discussed the enhanced forward presence, training and capacity building in Iraq, support for the Counter-ISIL coalition, Operation Sea Guardian, cyberspace as an operational domain, NATO’s commitment to enhancing resilience, missile defense, Afghan and Ukrainian support, and cooperation with the European Union. The Allied countries have agreed to augment the presence of NATO’s military presence in the Alliance’s eastern countries which include Estonia, Latvia, Lithuania and Poland by adding battalions (a battalion is typically 300 to 800 soldiers divided into two or more companies). NATO is working on providing strategic advice and support to fight against ISIL (also known as ISIS) as well as training hundreds of Iraqi officers.

During the Warsaw Summit, it was agreed upon to support the Coalition directly by providing air surveillance and increasing situational awareness to tackle terrorism and other rising threats. The Allies have also agreed on launching a new maritime security operation in the Mediterranean named Operation Sea Guardian that will perform tasks such as upholding freedom of navigation, conduction of interdiction tasks and protection of critical infrastructure. When looking at cyberspace, NATO acknowledges it as an operational domain that joins land, air, sea and space. By acknowledging this, the Allies will be able to better defend its networks, missions and operations with a better focus on cyber planning and training. They have pledged to strengthen their own cyber defenses and share more information and practices.

The Allies of NATO have made it a priority to improve their resilience as well as developing individual and collective capacity to resist armed attacks. By accomplishing the NATO Baseline Requirements for National Resilience, the Allies plan to improve civil preparedness. The NATO Baseline Requirements for National Resilience includes the continuity of government, essential services, security of critical civilian infrastructure and support of military forces with civilian means.

The Allies declared Initial Operational Capability of the NATO ballistic missile defense system, which means that US ships that are based in Spain, the radar in Turkey and the Romanian interceptor site are now able to work as a conglomerate under the command of NATO.

The Allies of NATO stand by Afghanistan and Ukraine. When speaking on the stability of Afghanistan, NATO reconfirmed their long-term commitment to them as well as the sustainment of its Resolute Support Mission to train, advise and assist Afghan security. As for Ukraine, the Allies are endorsing a Comprehensive Assistance Package that will make the defense and security institutions more effective, efficient and accountable. They are also working towards developing new projects on countering hybrid warfare and launching a new Trust Fund to support dealing with improvised explosive devices and unexploded munitions.

NATO takes a firm stance on their relationship with the European Union. They have a Joint Declaration that highlights the expansion of their cooperation, countering hybrid and cyber threats, supporting their partners in defense capacity building, and increasing maritime security. NATO has an expansion with the EU into the Mediterranean Sea in effect, also. Information will be shared and coordinated to make the task of tackling illegal migration, terrorism and other challenges more effective. NATO may have a possible role in the Central Mediterranean to complement or support the EU’s Operation Sophia.

Tiana K. Allen is the editor in chief of the nationally-award winning Spartan Echo student newspaper and SpartanEcho.org at Norfolk State University in Norfolk, Virginia, where she also serves as the marketing manager for the NSU chapter of the Public Relations Student Society of America. The Spartan Echo and PRSSA attended the ACT conference by invitation of NATO-ACT as part of an outreach program to local universities. She anticipates graduating from NSU with a bachelor’s degree in journalism in May 2017.