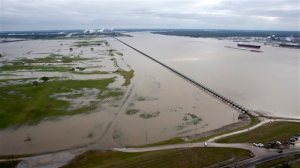 CORRECTS TO REFLECT POOL STATUS OF PHOTO – Workers with the U.S. Army Corps of engineers drain water from the Mississippi River, right, into the Bonnet Carre Spillway Sunday, Jan. 10, 2016, in Norco, La. The Mississippi River water levels are rising because of heavy December rain in the Midwest. The opening of the Bonnet Carre Spillway helps relieve pressure on New Orleans-area levees by making sure the water doesnt flow faster than 1.25 million cubic feet per second through the city. (Scott Threlkeld/The Advocate via AP, Pool)

NORFOLK, Va. (AP) — One of Virginia’s most vulnerable localities to rising seas is teaming up with the Army Corps of Engineers to conduct a flood risk management study.

The Corps and the city of Norfolk are scheduled Wednesday to ink the deal for the $3 million study. The two will split the costs. The end product of the study will include recommendations for addressing flooding in a city that is home to the world’s largest naval base.

The expected completion date of the study is February 2019.