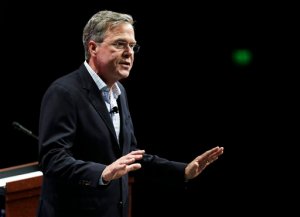 FILE – In this Nov. 13, 2015 file photo, Republican presidential candidate Jeb Bush speaks in Orlando, Fla. Republicans are using the latest attacks in Paris to appeal to U.S. voters jittery about terrorism. Several Republicans, including presidential hopeful Jeb Bush and former candidate Mitt Romney, appeared on the television networks Monday to decry President Barack Obama’s policies as half-hearted and to suggest that a U.S. ground war against the Islamic State may be inevitable. (AP Photo/John Raoux, File)

COLUMBIA, South Carolina (AP) — Republican presidential candidate Jeb Bush is making it clearer that his call for the U.S. refugee program to give preference to Christians fleeing Syria does not exclude Muslims.

His campaign says Bush supports accepting women and children regardless of their religion and does not exclude Syrian Muslims broadly, as long as the refugees can be effectively vetted.

President Barack Obama has rebuked what he called a “shameful” religious test in the refugee policies of some Republican candidates. Both Bush and Ted Cruz have said preference should be given to Syrian Christians.

Bush spokesman Tim Miller said Tuesday that Bush believes the refugee policy should favor women and children as well as persecuted Christian minorities, but no one should be allowed in when there is not enough information about them.

Miller said Bush does not believe the U.S. should eliminate support for refugees. He said Bush believes refugees are a “noble tradition in our country for decades,” but that they should not be accepted “if there’s any kind of concern” about their backgrounds or intention.

In an earlier address to business leaders during a South Carolina campaign swing, Bush called the struggle against the Islamic State group “the war of our time.”