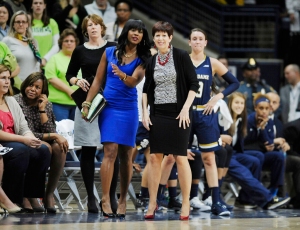 “There is no other place that has impacted me more as a player, coach, and person than Notre Dame,” Ivery stated on the Notre Dame’s women’s basketball website. Ivery is now going to be working in the NBA where there are few women coaching, but NCAA basketball is not that much different and could account for the low numbers of female coaches in the professional ranks.

“The representation of females as head coaches of women’s teams is at its lowest in history at 46%,” according to data collected from Women in Intercollegiate Sports.

If there are twenty-four sports in the NCAA and 1,115 schools, then why do women coach only 46% of women’s teams?

McGraw is a strong advocate for gender equality in NCAA coaching and she makes a point.

Before the enactment of Title IX, which prohibits discrimination based on sex, over 90% of women were coaching women’s sports, but since then only 40% are coaching. One reason could be that because more money is at stake in women’s sports since Title IX, which provides better opportunities for women athletes, now both men and women want to pursue coaching women’s athletics. Since women had historically coached women’s sports, it now can be hard for them to get coaching jobs because they have to compete with men who are applying as well.

While Title IX has been good for women’s sports, it seems to have hurt female coaches as more and more men take those roles.

NCAA sports is gradually growing in size, it’s increasing in numbers of students competing, which means it allows for more coaching opportunities. Women are speaking out more about there not being enough women coaches and they will keep bringing up the subject until women coaches are a norm and not a rare occurrence.