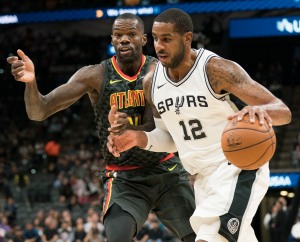 Aldridge had 22 points and 11 rebounds, Anderson had another solid game in place of Kawhi Leonard and the Spurs held off the Atlanta Hawks 96-85 on Monday night.

Aldridge fueled the Spurs in the second half, but Anderson had another methodical all-around game.

“He’s been ready for the moment,” Aldridge said. “He’s been playing really confident, making plays for us, being the other guy to be a ball-handler and been just saving us in games, basically.”

Anderson had 13 points, 10 assists and six rebounds in his 17th start in place of injured All-Star Leonard.

The 6-foot-9 forward out of UCLA has taken advantage of playing 27 minutes per game this season after averaging less than 14 in his previous three. Nicknamed “Slow Mo” for his lack of foot speed, Anderson patiently worked his way to 5-of -8 shooting and had just two turnovers in 30 minutes.

“He gets to handle the ball more and that’s his game, too,” said San Antonio veteran Manu Ginobili, who had 16 points. “He’s playing as a point power forward. He’s a tough matchup because of his size and his handles.”

Anderson didn’t score any points in the fourth but had four assists in the quarter to help Aldridge push the Spurs past the pesky Hawks.

Aldridge, who is averaging a team-high 22.3 points, had 12 points with six rebounds in the fourth quarter.

Danny Green followed that by hitting consecutive 3-pointers to stretch the lead to 90-79 with 3 minutes remaining.

Hawks: Atlanta’s last victory in San Antonio was Feb. 15, 1997. … Hawks center Miles Plumlee did not play after being listed as probable with a strained right quadriceps. … Atlanta has nine players with one year of NBA experience or less. … The Hawks entered third in the league with 9.1 steals per game. They had seven against the Spurs. … Budenholzer, a former San Antonio assistant, and Dedmon both received warm ovations during pre-game introductions.

Spurs: San Antonio has already missed 52 games due to injury, including the season-long absences of Leonard and Tony Parker. Coach Gregg Popovich did not offer a timeline for either to return from quadriceps injuries. … Anderson has scored in double figures in eight of 17 games this season after doing so just four times in 72 games last season.

Atlanta lost Luke Babbitt in the second quarter due to a lower-back injury. Babbitt’s exit was precautionary. Budenholzer was unsure how long Babbitt will be out.

Hawks: Host Los Angeles Clippers on Wednesday night in the opener of a four-game homestand.

Spurs: Visit New Orleans on Wednesday night in their first meeting of the season against Anthony Davis and DeMarcus Cousins.