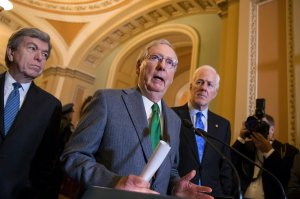 House Speaker Paul Ryan says the GOP drubbing in Tuesday night’s off-year elections “just puts more pressure on making sure we follow through” on the party’s drive to overhaul the tax code.

The Wisconsin Republican, speaking at an event held by the Washington Examiner, added that the GOP tax bill would “bear fruit politically, but most importantly it’s going to help people.”

He spoke hours after Republicans lost gubernatorial races in Virginia and New Jersey by large margins in off-year elections that appear to be a bad omen for GOP chances in next year’s midterms.

The tax rewrite effort has assumed even greater significance in the wake of the GOP failure to repeal the Obama health care law.

Congress’ nonpartisan budgetary analysts say ending the requirement that most people buy health insurance would save less money than was estimated earlier.

The Congressional Budget Office says repealing the so-called individual mandate would save $338 billion over a decade. The office had estimated $416 billion in savings earlier this year.

Republicans have said they’re considering repealing the individual mandate in their tax bill. The savings would give them more room to cut other taxes in their legislation. Wednesday’s smaller budget office estimate means they’d have less money to play with.

President Donald Trump wants to include the repeal in tax legislation. Doing so would complicate the tax bill’s passage because of GOP divisions over health care, and so far the repeal is not in the House or Senate versions.

House Republicans have blocked Democrats’ efforts to get bigger tax benefits for the cost of raising or adopting children.

As the House’s tax-writing committee feverishly sprints toward a completed bill by week’s end, the Senate’s tax bill is starting to take shape. That version is expected to completely repeal the federal deduction for state and local taxes but retain the medical expense deduction.

The House GOP plan calls for repealing the adoption tax credit. One of the Democratic proposals defeated Tuesday would have restored that credit.

Another defeated Democratic amendment would have added a $3,600 credit for families with children under age 6.