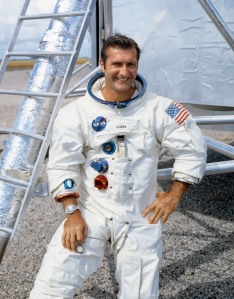 This undated photo made available by NASA shows astronaut Richard Gordon Jr. Gordon, one of a dozen men who flew around the moon but didn’t land there, has died, NASA announced Tuesday, Nov. 7, 2017. He was 88. (NASA via AP)

WASHINGTON (AP) — Former Apollo 12 astronaut Richard Gordon, one of a dozen men who flew around the moon but didn’t land there, has died, NASA said. He was 88.

Richard “Dick” F. Gordon Jr. was a test pilot chosen in NASA’s third group of astronauts in 1963. He flew on Gemini 11 in 1966, walking in space twice. During Apollo 12 in November 1969, Gordon circled the moon in the command module Yankee Clipper while Alan Bean and Charles Conrad landed and walked on the lunar surface.

Gordon died Monday at his home in California, according to the Astronaut Scholarship Foundation.

“Dick will be fondly remembered as one of our nation’s boldest flyers, a man who added to our own nation’s capabilities by challenging his own. He will be missed,” acting NASA administrator Robert Lightfoot said in a statement Tuesday.

Born in Seattle, a Navy captain and a chemist, Gordon was such a steely professional that after a difficult first spacewalk, he fell asleep during a break in his second spacewalk. He downplayed Apollo 12 being hit by lightning during launch.

In a 1997 NASA oral history, Gordon said people would often ask if he felt alone while his two partners walked on the moon. “I said, ‘Hell no, if you knew those guys, you’d be happy to be alone’.”

Gordon described the Apollo 12 mission, the second moon landing, as full of antics and dust.

When Conrad and Bean returned and docked their lunar module with his command module, Gordon said he looked in and “all I could see was a black cloud in there. I didn’t see them at all. I looked in there and said, ‘Holy smoke. You’re not getting in here and dirtying up my nice clean Command Module.’

Gordon had been slated to command the Apollo 18 mission that would land on the moon, but it was cut for budget reasons.

“He was a happy guy and just the best possible crewmate and friend,” Bean said Tuesday.

After retiring from NASA in 1972, he became executive vice president of the New Orleans Saints football team. He went on to be an executive in energy and science companies.