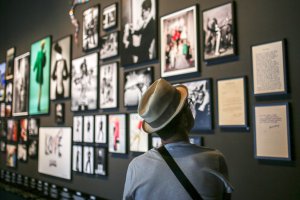 A visitor attends a gallery inside the Yves Saint Laurent museum, in Marrakesh, Morocco, Thursday, Oct. 19, 2017. The Yves Saint Laurent museum in Marrakech, the sunny Moroccan city beloved by the late French designer, opened its doors to the public Thursday. The highly-anticipated opening comes less than three weeks since the inauguration of a museum dedicated to the fashion pioneer in his home city of Paris. (AP Photo/Mosa’ab Elshamy)

The highly-anticipated opening comes less than three weeks since the inauguration of a museum dedicated to the fashion pioneer in his home city of Paris.

The Marrakech museum, designed by the French architectural firm Studio KO, sprawls across 4,000 square meters (43,000 sq. feet) near the Majorelle Garden, which Yves Saint Laurent and his late partner Pierre Berge bought in 1980.

It features a permanent exhibit on the work of the prolific French couturier who died in 2008, and includes an exhibit hall, an auditorium, a library, a bookshop and a restaurant.

The museum was inaugurated Oct. 14 by the wife of Moroccan King Mohammed VI, Lalla Salma, alongside actresses Catherine Deneuve and Marisa Berenson.

“This project finds its genesis in the temporary exhibition organized in the Majorelle Garden, which was called ‘Yves Saint Laurent and Morocco,'” explained Museum Director Bjorn Dahlstrom. “(That) exhibition was so enthusiastically welcomed that Bergé decided to create here, in Marrakech, a museum dedicated to Yves Saint Laurent.”

At the entrance to the museum, visitors bought tickets Thursday next to a red facade of Tetuan brick and granite, which Dahlstrom said “fits perfectly in the urban environment of Marrakech.”

Berge, who died earlier this year and was also Saint Laurent’s business partner, “often came to the construction site to see its progress,” said Sanaa El Younsi, a member of the museum team. “What a pity he’s not here to attend the opening.”

The Majorelle Garden, next to the museum, has a special significance for Saint Laurent, who would often design his collections in the shade of the city’s dappled terracotta buildings with the scent of flowers in the air. Today, the Majorelle Garden is one of the most visited tourist sites in the city.

Saint Laurent would come here “as soon as “he finished a collection, to rest and prepare a new collection” said Majorelle Garden Foundation head Quito Fierro.

“The garden was closed to the public between 12:30 p.m. and 2:30 p.m. to allow Yves Saint Laurent to walk without meeting people,” he remembered. “Almost all the collections were drawn on a white sheet in Marrakec