LONDON (AP) — U.K. Prime Minister Theresa May is speaking directly with leaders of some of the European Union’s biggest member states ahead of a meeting in Brussels aimed at unblocking negotiations on Britain’s departure from the bloc.

May spoke by phone with German Chancellor Angela Merkel and planned to call France’s Emmanuel Macron and Ireland’s Leo Varadkar ahead of a working dinner with senior European Union officials in Brussels on Monday.

May’s office was at pains to suggest that the dinner with European Commission President Jean-Claude Juncker and chief negotiator Michel Barnier had been planned weeks ago. The EU said it was announced late because both sides wanted to be sure both sides could attend.

Besides Brexit, the session is set to include discussions on Iran and internet extremism, May’s office said.

“I will see Mrs. May this evening,” Juncker said. “We will have discussions and then you will have the autopsy.”

The session comes only days after Barnier warned that the latest round of Brexit talks ended in a “disturbing deadlock” over Britain’s financial obligations to the bloc.

EU estimates suggest Britain must pay from 60 billion euros to 100 billion euros ($80 billion to $120 billion) to settle commitments it made while part of the EU, such as development projects and the pensions of civil servants. Britain has rejected such figures.

The EU is demanding progress on the so-called divorce issues – the financial settlement, citizens’ rights and the status of the border between the Republic of Ireland and Northern Ireland — before talks can move on to issues such as future trading and security arrangements. Leaders of other 27 member states are expected to rule this week that there hasn’t been enough progress for the talks to move forward.

By speaking with EU heads of state in advance, May is likely to be trying to re-position the country in the talks, said Victoria Honeyman, a lecturer in British politics at the University of Leeds.

“If May can try to get some leverage with Merkel, Macron etc. then she might be able to reach a deal …… that will require (Barnier) to be given new instructions,” said Honeyman.

British Foreign Secretary Boris Johnson on Monday urged the EU to speed up talks and start a discussion of the future relationship with the U.K., which is set to leave the bloc in March 2019. Arriving at a meeting of EU foreign ministers in Luxembourg, Johnson said it was time for the negotiators to get moving and “stop letting the grass grow under our feet.”

It is time for “the great ship to go down the slipway and onto the open sea and for us to start some serious conversations about the future and the new relationship,” Johnson told reporters.

The pressure is truly on for May and her government. Big business, and in particular the financial services industry, is pressuring the country’s leaders to act, arguing that further delays will force companies to relocate.

Financial firms with EU headquarters in London worry about losing the automatic right to do business in the rest of the EU if Britain crashes out of the bloc without agreeing on a new trade relationship.

The lobbying group for financial services, TheCityUK, warned Monday that firms will start relocating jobs in the new year unless a transitional deal is struck soon.

“They can still take their foot off the accelerator if a transitional deal is agreed, but without progress soon, it may be too late,” said the group’s chief executive, Miles Celic. “Once businesses start moving, there is no reverse gear. It is simply not efficient or economically viable to move operations twice.” 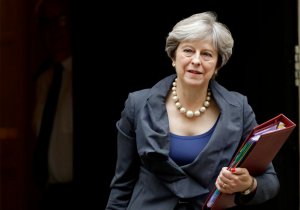