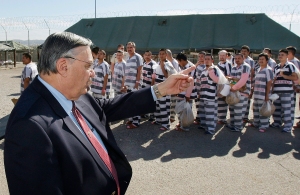 FILE – In this Feb. 4, 2009, file photo, Maricopa County Sheriff Joe Arpaio, left, orders approximately 200 convicted illegal immigrants handcuffed together and moved into a separate area of Tent City, for incarceration until their sentences are served and they are deported to their home countries, in Phoenix. An audit report produced in a racial profiling case against the Maricopa County Sheriff’s Office says Hispanics are more likely to be searched and arrested by sheriff’s deputies in traffic stops than white people. The report was issued nearly four years after a judge ordered a sweeping overhaul of then-Sheriff Joe Arpaio’s office after concluding officers had racially profiled Hispanics in immigration patrols. (AP Photo/Ross D. Franklin, File)

Today, the agency is still dogged by findings that its officers treat minorities differently than whites during traffic stops.

An audit conducted by criminal justice researchers at Arizona State University as part of the profiling case concluded that Hispanics are more likely to be searched and arrested by sheriff’s deputies in traffic stops than whites.

The agency’s response to the report is expected to be discussed at a court hearing Wednesday. The study, released last week, examined 31,000 traffic stops from July 2015 through June 2016, near the end of Arpaio’s 24-year tenure as metropolitan Phoenix’s top law enforcer.

“The likelihood of Hispanics being arrested or searched over time has not decreased, or even changed,” wrote the researchers, who had conducted an earlier study of the agency’s traffic stops. “Conversely, the length of stop for Hispanic drivers, while still longer than whites, decreased across years.”

The report was released a month after Arpaio was pardoned by President Donald Trump for his conviction for intentionally disobeying a court order in the profiling case.

Sheriff Paul Penzone, who took office in January after defeating Arpaio, is developing plans for confronting the problems identified in the report, including providing sheriff’s deputies and their supervisors with training.

Another report issued this summer by officials who are monitoring the agency on the judge’s behalf charts the status of the sheriff’s office in complying with the court-ordered overhaul.

Taxpayers in metro Phoenix will remain on the hook for legal costs in the case until the sheriff’s office comes in full compliance for three straight years with the court-ordered changes. By next summer, the costs are expected to reach $92 million.

Penzone’s office declined a request from The Associated Press to comment on the report.

Penzone, while on the campaign trail, had vowed to make compliance with the court orders one of his top priorities.

Follow Jacques Billeaud at twitter.com/jacquesbilleaud. His work can be found at https://www.apnews.com/search/jacques%20billeaud.