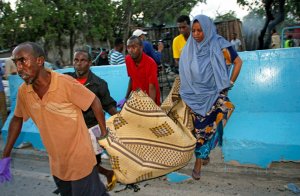 Somalis carry away the dead body of a person who was killed when a car bomb detonated in Mogadishu, Somalia, Wednesday, May 24, 2017. A Somali police officer says a number of people have been killed in a car bomb blast outside a restaurant near the port in the capital. (AP Photo/Farah Abdi Warsameh)

The Somalia-based group has vowed to step up attacks in Mogadishu and elsewhere after the federal government recently announced a new offensive against the group. Targets have included high-profile spots like military facilities, hotels and areas close to the presidential palace.

The car with explosives had been parked outside a restaurant near the city’s port, Capt. Mohamed Hussein told The Associated Press.

Somalia’s military is under growing pressure to assume more responsibility for the long-chaotic country’s security as a 22,000-string multinational African Union force plans to start withdrawing next year.

The prospect of a security vacuum has concerned the international community. Somalia’s president has urged that the U.N. arms embargo on his country be lifted in the months ahead, saying the military needs more than AK-47s to combat al-Shabab extremists and the small but growing presence of Islamic State-linked fighters in the country’s north.

President Mohamed Abdullahi Mohamed has repeatedly said al-Shabab can be defeated within two years, but he has warned that could take much longer without a better-equipped national military.