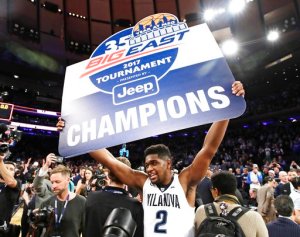 There are 67 games to be played over the next three weeks to determine the next national champion, a magical time known as the NCAA Tournament.

So what’s in store in 2017? Is there any way to top the madness of last year’s tournament filled with double-digit upsets and an incredible ending?

Anyone up for a rematch in the April 3 title game in Phoenix? It’s possible with the defending national champion Wildcats and North Carolina, a five-time champ, are No. 1 seeds on opposite sides of this year’s bracket.

Here are a few things to watch with the NCAA Tournament about to get underway:

The Jayhawks, who won their 13th consecutive Big 12 regular-season title, lost their only Big 12 Tournament game 85-82 to TCU in Kansas City, where they could play again in the Sweet 16 if they win a couple of NCAA Tournament games. ACC regular-season champion North Carolina fell to Duke 93-83 in the league tournament semifinals.

Defending national champion Villanova (31-3), the overall No. 1 seed, swept the Big East regular-season and conference titles, as did Gonzaga (32-1) in the West Coast Conference.

Middle Tennessee State pulled off the biggest shocker as a No. 15 seed last year with a 90-81 win over Michigan State, which went into that tournament as trendy pick to win a national title. The Blue Raiders are now a No. 12 seed against Minnesota.

Virginia Commonwealth is a No. 10 seed again, this time against Saint Mary’s after winning its opener over Oregon State last March.

Wichita State is a No. 10 seed, and listed as an early favorite this year against Dayton. The Shockers were a No. 11 seed last year when they upset Arizona .

— ON THE WRONG SIDE: Baylor, a No. 3 seed again this season and playing New Mexico State, has lost to double-digit seeds in its opener in the last two NCAA Tournaments.

The Big 12 Bears lost to 12th-seeded Yale last year after 14th-seed Georgia State pulled off a first-round upset in 2015 on R.J. Hunter’s 3-pointer with 2.7 seconds left.

— REGULAR ATTENDERS: Tom Izzo is in his 20th straight NCAA Tournament as Michigan State’s coach. Bill Self is making his 19th consecutive appearance — 14th with Big 12 champion Kansas (half of the Jayhawks’ record 28 consecutive NCAA appearances) after trips with Tulsa and Illinois.

There’s no chance of Izzo and Self both getting to the Sweet 16. The Spartans and Jayhawks, both with a national title under their coaches, could meet in a second-round game Sunday in the Midwest Regional at Tulsa, Oklahoma.

— COACHING BLOODLINES: Northwestern plays its first-ever NCAA Tournament game against Vanderbilt, whose 15 losses are the most ever by an at-large team. Both coaches in the West Region’s 8-9 matchup are the 42-year-old sons of former coaches.

The Wildcats are in their fourth season with coach Chris Collins, the son of former NBA coach Doug Collins.

Bryce Drew, the son of former Valparaiso coach Homer Drew and younger brother of Baylor coach Scott Drew, is in his first season at Vanderbilt (19-15). Bryce Drew, who like his father coached Valpo to multiple NCAA appearances, is also known for his buzzer-beating 3-pointer as the Crusaders upset fourth-seeded Ole Miss in their 1998 NCAA opener on way to the Sweet 16.

— FATHER-SON: This is the first time a father and son are head coaches of different teams in the same NCAA Tournament.

Minnesota is in for the first time since 2013 , the year before Richard Pitino became the Golden Gophers coach. Like his father Rick at Louisville, Richard Pitino has led his team to 24 wins so far this season.

The only way they play each other is if Minnesota and Louisville both make the championship game.

— PRINCETON MEMORIES: The last time Princeton won an NCAA Tournament game, Mitch Henderson was a guard who scored 19 points against UNLV in a first-round game in 1998. That was two years after he was also part of an opening-round win over defending champion UCLA in coach Pete Carril’s last season with the Tigers.

Henderson is now Princeton’s coach, and the Ivy League champions are in their first NCAA since 2011, as a 12th seed that will play Notre Dame.

For more AP college basketball coverage: http://collegebasketball.ap.org and http://twitter.com/AP_Top25 .
Copyright 2017 The Associated Press. All rights reserved. This material may not be published, broadcast, rewritten or redistributed.